THE SUN IS ALSO A STAR

“A genial and earnest but incredulous teen love story.”

A genial and earnest but incredulous teen love story, nevertheless is admirably helmed by Ry Russo-Young (“Before I Fall”) and decently written with respect for the lead characters and the hardships immigrants sometimes face by Tracy Oliver. It’s based on Nicola Yoon’s 2016 bestseller YA. Yoon is Jamaican, while her hubby is Korean-American. It tells of a likable NYC couple, who against all odds (like little chemistry between them) find love together after one hectic day of getting to know each other. The poetic Korean-American Daniel Bae (Charles Melton), a candidate for Dartmouth, by chance meets the aspiring astronomer, the Jamaican-born high-school senior Natasha Kingsley (Yara Shahidi), on a day when Natasha’s entire family is scheduled to be deported. At Grand Central Terminal Natasha is wearing a “Deux Ex Machina” jacket and looking up at the ceiling, as she waits for her family to leave a meeting with a sympathetic immigration lawyer (John Leguizamo). She is spotted by the dashing Daniel. The romantic just moments before scribbled those very same words written on her jacket in his notepad. He is on his way to an important interview with Dartmouth admission officers to determine if he’s to be accepted. While chatting with her, she tells him she doesn’t believe in romance. He thereby challenges her to spend a day with him to disprove her theory. The mod lovers take in such tourist sights as Chinatown, the Financial District, a Korean karaoke joint, the tram to Roosevelt Island, the Hayden Planetarium and Harlem’s Apollo Theater. What no Coney Island or Yankee Stadium? The film celebrates love as alive and kicking in the Big Apple for the adventurous, while the city is viewed as a melting pot teeming with immigrants and a place where both impossible dreams and corny love stories can come true. 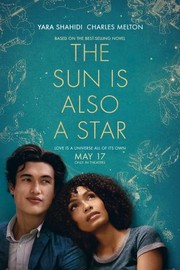