If it weren’t for the preposterous ending, this would have been an amusing and skillfully accomplished Chabrol thriller. “Merci” is set in Lausanne, the French part of Switzerland. It’s Chabrol at his smoothest as he transforms Charlotte Armstrong’s American mystery “The Chocolate Cobweb” into a French bourgeoisie setting. The veteran filmmaker of some 50 films works on familiar ground of ridiculing the bourgeoisie and their penchant for making appearances their most cherished value. The filmmaker shuffles in a story about a possible mix-up in babies at birth with a story about a renown concert pianist, whose marriage is open for scrutiny. It also plays with the making of a perfect hot chocolate drink and the side effects from getting hooked on sleeping pills.

The film opens as Mika Muller (Huppert), the managing director of a long established successful chocolate company, is remarrying concert pianist André Polonski (Dutronc). They were married briefly 18 years ago. Andre’s second wife Lisbeth had a son Guillaume. At the hospital, the nurse mistakenly showed the joyful Andre a daughter born at the same time named Jeanne (Mouglalis). Jeanne finds out by accident from her clinical doctor mom, Louise Pollet, that it was no big deal, as the correct babies were soon established. But Jeanne considers it an odd coincidence that she’s also a piano student and decides to visit Andre at his luxurious home, wondering if he could be her real dad. They hit it off and he gives her piano lessons at his residence so she could play Liszt’s Funerailles for her concert recital competition.

Andre’s marriage to Mika is digested for what security it offers both and the warmth it lacks. She appears content as she’s accepted by the public as a generous member of the upper-class. But under the surface she hides deep psychological hurts. Guillaume is an idler and disappoints his father, even though he still loves his son. Jeanne has the smarts and work ethic of Andre, and for that upsets both Guillaume and Mika. Andre beams in Jeanne’s presence and shows life for the first time in the house.

At its best moments Chabrol plays it as a satire on bourgeois life. Underneath the normalcy lies a maddening brand of tension and danger. It was the usual take by Chabrol on these kind of wealthy dysfunctional families, as he playfully loves to prick away with his absurd humor at their superiority and respectability. Despite its ill-conceived ending, I could easily recommend it as it stands. It’s still fun to watch a smiling Huppert spill hot chocolate on her stepson. The ensemble cast all sparkled. 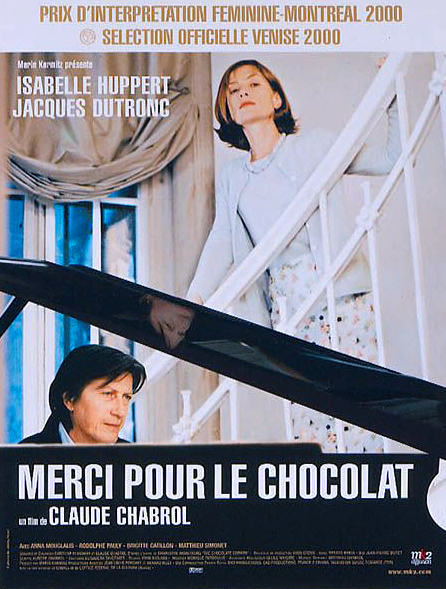