THE STORY OF THREE LOVES

“A decent middle-brow piece, with fine acting and lots of star power.”

Co-directed by Gottfried Reinhardt (“Before Sundown”/”Betrayed”) and Vincentc Minnelli (“The Sandpiper”/”Bells are Ringing”). This shipboard drama tells of three people reflecting on their past European romances. The unrelated stories connection is that the three storytellers are aboard the same ocean liner departing from Europe and heading for the United States. The three stories are based on the stories by Arnold Phillips, Ladislas Vajda, Jacques Maret. The writers are George Froeschel, Jan Lustig and John Collier.In the first story, The Jealous Lover, an uneven weepie inspired by The Red Shoes, has acclaimed ballet choreographer (James Mason) recalling his tragic relationship with a talented young Scottish ballerina (Moira Shearer, star of The Red Shoes). a dancer who is forced to quit dancing due to her heart condition. The noted producer Gottfried Reinhardt, son of the legendary German stage actor Max Reinhardt, directs this episode.In “Mademoiselle,” a fantasy story set in Rome and inspired by the Cinderella story, is told by a French governess. It’s the most colorful segment in the omnibus film, and is directed by Minnelli. It tells of a young American boy (Ricky Nelson) magically transformed by a witch (Ethel Barrymore) for one evening into a grown-up (Farley Granger) and then begins a romance with his overbearing French tutor -governess (Leslie Caron). In “Equilibrium,” a bleak story set in Paris, a guilt-ridden trapeze artist (Kirk Douglas, hammy performance), whose partner died while performing, asks a suicidal war widow and concentration camp survivor (Pier Angeli) to join his death-risk act without a safety net. The glossy arty film bombed at the box office, even if a decent middle-brow piece, with fine acting and lots of star power. 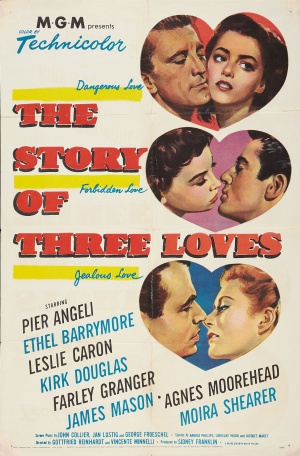