Murder Ahoy (1964) was the third of four of the Agatha Christie film series to be released, starring the lovable Dame Margaret Rutherford as the meddling but lovable sleuth Miss Marple, even though it was the final one filmed. For those interested in the order: Murder, She Said – August, 1961; Murder at the Gallop – April, 1963; Murder Most Foul – February, 1964; Murder Ahoy – July, 1964.

Murder Ahoy is based on an original script by David Pursall and Jack Seddon and not one of Christie’s stories as were all the others. George Pollock (“Murder Most Foul”/And the Same to You”/”Kill or Cure”) efficiently directs this pleasant enough but hardly captivating murder mystery tale, that suffers from an implausible finale and lame dialogue.

The elderly Miss Marple, a fellow trustee and private detective, investigates the death of a charity trustee, Cecil Ffolly-Hardwicke, before he can reveal important info concerning the H. M. S. Battledore, the naval cadet ship used by the trust to rehabilitate juvenile delinquent boys. Miss Marple, to the police’s disbelief, discovers that Hardwicke has been poisoned. The bumbling Captain de Courcy Rhumstone (Lionel Jeffries) is not pleased when Miss Marple stays aboard the ship to investigate. She’s aided from the shore by a mild-mannered elderly librarian named Mr. Stringer (Stringer Davis, the real-life husband of Margaret Rutherford).

Miss Marple observes Lieutenant Compton (Francis Matthews) taking advantage of a group of the criminal cadets by giving them pointers in the art of housebreaking so they won’t get caught, and afterwards he’s killed on deck by a sword. The police report that there have been a number of burglaries in the area, with the thieves stealing mostly jewelry. Also slain is an assistant matron (Norma Foster), who discovers the stolen loot aboard the ship.

Miss Marple learns in her investigation that Commander Breeze-Connington (William Mervyn) is an embezzler and has murdered the two victims to protect himself. The sleuth charges Breeze-Connington as a murderer and then has to outduel the villain in a fencing match, whereby he gets arrested when the grumpy police finally arrive. Of note, Rutherford was in her youth a good fencer. 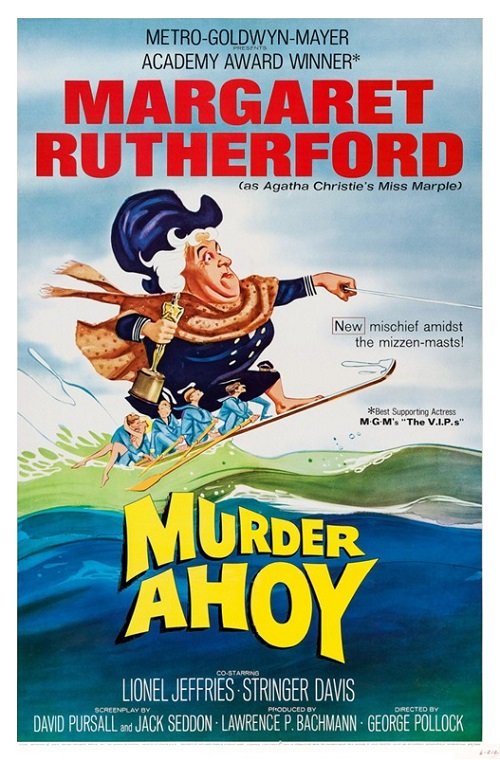