SPY WHO CAME IN FROM THE COLD, THE

“Ritt helms one of the better spy dramas.”

Based on the bestselling novel The Spy Who Came in from the Cold by John Le Carre. It’s a tense Cold War thriller of espionage and double-crosses that’s brilliantly plotted and scripted by Paul Dehn and Guy Troper. Richard Burton gives one of his best ever brooding performances and the entire talented cast matches his first-rate performance. Nominated for a Best Actor Oscar, Burton lost to Lee Marvin in Cat Ballou. Along with Peter O’Toole, he was nominated for the most Best Actor awards (seven) without winning. Director Martin Ritt (“Hud”/Hombre”/ The Outrage”) can’t dish out his usual liberal message and is left only with a pessimistic message about the spy game on both sides of the curtain that won’t be too pleasing to anybody from patriot to dissident. In a masterful semi-documentary style narrative, avoiding a James Bond look or any gimmickry, Ritt helms one of the better spy dramas. It’s brilliantly shot in a noirish black and white monochrome by Oswald Morris.

Alec Leamas (Richard Burton) is a German speaking burnt-out British MI6 master secret agent stationed in Berlin who is offered a desk job when he’s told by his boss at Control (Cyril Cusack) to “come in from the cold” and retire, but refuses that assignment and is offered instead one last dangerous one to defect to East Germany and get even with his counterpart in East Germany.

Following the interception of several British sub-agents, Control stages an elaborate plan to convince the Communist spies in East Germany that an embittered, disillusioned, impoverished and alcoholic Alec is ready to defect. The man without any friends is hooked up by his agency with a job as a library assistant in London and meets the other assistant, the naive idealistic young member of the British Communist Party named Nan Perry (Claire Bloom), and becomes romantically involved with her. When Alec punches out a grocer over a tab he’s imprisoned and when released Communist agents Ashe and Carlton offer him money to spill the beans on what he knows about Control if he takes a two-week trip to Holland. There he’s forced to go behind the Iron Curtain in East Germany where he’s grilled by the second in command, Fielder (Oskar Werner), a brilliant Jew dedicated to the party who is eager to frame his ex-Nazi boss, Alec’s East German counterpart Hans-Dieter Mundt (Peter Van Eyck), as a double agent.

Alec provides Fielder with enough information to show that Mundt was being paid off by the Brits. But at a secret tribunal Nan is called as a surprise witness, and Alec realizes he was duped by his agency and that the real purpose of the plot was to eliminate the nosy Fiedler and keep Mundt in power, who is really a double agent.

What is smashing is the film’s lack of moralizing about what’s right or wrong and any showing of sentimentality. It instead reveals the secret downbeat dark and seedy work of the agents, all seemingly banal sorts, and the film’s shabby look filters down from the characters to the dreary landscapes–all of which lend a convincing air to the charged story. 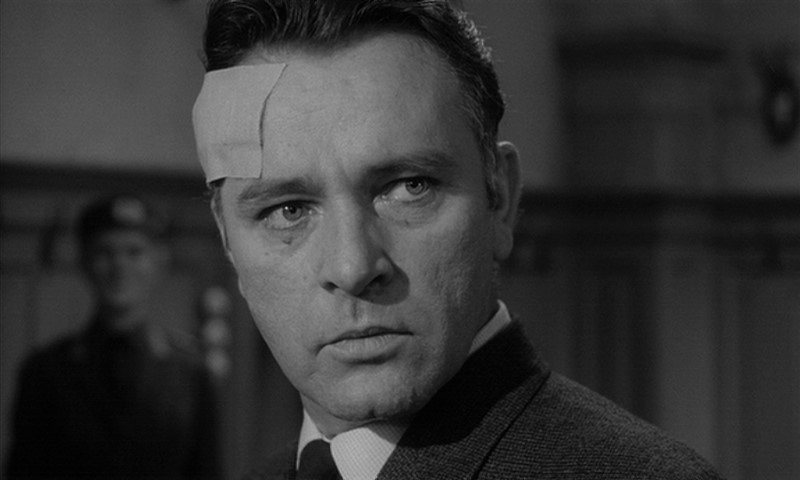