Longtime director of television commercials, the 59-year-old Swedish director Roy Andersson, creates a surrealist black humor farce that consists of a number of unrelated sketches that revolve around the upcoming new millennium and the potential for the Y2K bug, casting a spell of physical and mental breakdowns on the urban inhabitants involved by pointing out how the world is both absurd and a difficult place to be human. It’s a stylishly shot studio film presented with long takes, lots of blue, grey and dull green tints in its photography to give the film a despairing look and is shot with a basically inactive camera. It took four years to complete with its nonprofessional cast hired for their physical looks, who were thankfully spared from doing much talking.

It was hard for me to get emotionally involved with its characters, but it earned my intellectual respect for its biting satire on religion (Jesus was crucified because he was a nice guy and not because he was the Son of God) and for amusingly depicting how without direction most citizens go about their pointless existence and how civilization is exploited by capitalism as if it were a market place for profit.

Andersson has dedicated the film to the early-20th-century Peruvian leftist poet Cesar Vallejo, and often uses the poet’s refrain “Beloved be the one who sits down” to make an absurd point. The director in his first feature since 1976 comes up with a zany Jacques Tati deadpan type of slapstick comedy but one that is as downbeat as any Ingmar Bergman film and as surrealistic as any Buñuel.

Without naming the greyish, ghoulish, dull city, one evening a series of absurd occurrences take place there: an uncaring boss (Carlsson), while lying in a gym’s tanning machine, orders his servile chief executive (Fahlstrom) to downsize and sack a longtime obedient clerk (Sten Andersson) as redundant, who when fired can’t accept his misfortune and reacts by degrading himself; a lost foreigner (Núñez) is violently beaten by passing young thugs just for asking where to locate someone, as the bystanders on a busy street just watch without helping; a magician (Vucino) makes a critical error by sawing deeply into the stomach of an audience volunteer in his sawing-a-man-in-half act; and, the town for no explainable reason comes to a grinding halt in a massive traffic jam and is also experiencing a catastrophic crash in the stock market signaling the possible end to world capitalism.

The main character is a portly, elderly, tired furniture showroom owner Kalle (Lars Nordh), who has snapped without cause and burned down his business to collect the insurance money. He’s despondent and still walks around with his face covered in soot, as he meets his younger struggling son Stefan in an empty restaurant. He’s mainly despondent because his older son Tomas wrote poetry until he went nuts and is now catatonic in an mental institution, where he visits and goes berserk because Tomas just stares without recognizing him or saying anything.

There are a few more absurdly comical vignettes. The most striking is a visit by uniformed soldiers to a former army general they served under, who is celebrating his 100th birthday in a luxury nursery home. The frail old timer is sitting up in a hospital crib with a bedpan under him as if imprisoned, while the doctors are expounding to the nurses about his enormous wealth. When a speech is delivered the senile general gives his best wishes to Hermann Göring and offers a Nazi salute. In another scene meant to disgrace the main character even more so, Kalle encounters a former business acquaintance, Sven, in the form of the ‘walking dead’—a suicide from whom he borrowed money– and in a conversation, he relays that he’s really glad he’s dead because he doesn’t have to repay him. Perhaps the film’s signature vignette, where it brings despair to the fullest, involves some corporate bigwigs dressed in robes who decide that the way to save themselves and their world of capitalism is by going through a religious-like sacrifice of a young woman. Afterward they sourly meet at the Grand Hotel content to tell themselves they did everything they could to save the world, even offering a ritualistic sacrifice of the younger generation.

The film argues that Western civilizations’ hopes are derived from its economic system and not from its religious beliefs, and if that system failed its citizens they would be left without hope. It’s a strangely amusing film and offers to the willing viewer a slice of absurdist Nordic surrealism. Its main problem is that it can’t sustain its gimmicky idea throughout, and the 40 or so vignettes all lead to the same kind of apocalyptic insanity and to a sophomoric kind of Beckett-like exchange over humiliation. The film can be best judged in how provoked the viewer was by it as a genuine oddity. Though I didn’t find it a masterpiece, I was more than delighted with its comical pronouncements and its overall effect.

Songs From The Second Floor shared the Special Jury Prize at the 2000 Cannes Film Festival. The musical honors are provided by Benny Andersson of Abba. 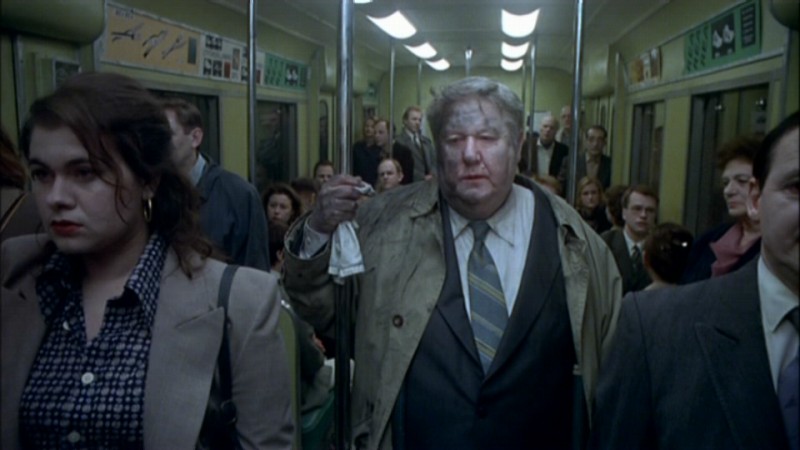