The director, M. Night Shyamalan (Wide Awake), is the former NYU film school graduate. He has a good sense of what it takes to make a mystery work. “Sixth” offers a superb performance from the eight year old elementary school boy lead, Cole Sear, played by the eleven year old Haley Joel Osment.

Dr. Malcolm Crowe (Bruce Willis), a gifted child psychologist in Philadelphia, who helps Cole get it off his chest the dark secret that makes him think he is a freak of nature. Cole has the ability to see dead people, ghosts.

Cole has a secret he can’t even tell his divorced mom, Lynn (Toni Collette). She fears that he is a bit strange, but not knowing how strange. This rare psychic gift, a sixth sense, enables him to see things clearly about the dead. But it frightens him because he does not understand what the ghosts want from him. He tries to resist them but they are so forceful they sometimes leave bruises on his body. This gift offers him little comfort in his daily life as he is friendless in school and burdened with self-doubts about his sanity, probably, quite willing to trade it all in to be “normal.”

Dr. Malcolm Crowe’s life is seemingly blissful–doing a job he loves, making a beneficial contribution to society and, to boot, receiving an award from the city of Philadelphia in recognition for his work in helping children. He also has a lovely wife, Anna (Olivia), whom he loves dearly, while she in return also loves him very much and supports his work. But, there is a problem and that comes when he is tipsy one evening and there is a break-in in his upscale house. Vincent Gray (Donnie Wahlberg) is standing in the doctor’s bathroom. Once he was the doctor’s patient, now as an adult he is standing before him in his underwear. The doctor is slowly trying to remember this case and who Vincent is, as the deranged former patient is telling him that he didn’t listen when he treated him; he didn’t understand what it meant to be alone and he abruptly shoots him in the stomach, angrily saying “You failed me,” and then turns the gun on himself.

Next fall we see a crestfallen Dr. Crowe, seemingly recovered from the gunshot. He follows Cole into a church and offers to help him, slowly gaining the child’s trust through free association games and showing a genuine liking for the child in a non-judgmental sort of way. He sees this as a chance to help this deeply troubled boy and also gain professional redemption for his past failure.

Willis is both likable and credible as the vulnerable doctor who develops a warm relationship with Haley. They both share a sadness about the events in their lives. The mother, Toni Collette, adds to the good rapport felt throughout the film, though she has a minor role. She can’t get through to Haley, mainly because she only wants to hear about the good things he says and Haley’s visions are often violent.

Haley’s fright is convincing because he does not over emote, but plays the role as a child would who knows that adults don’t like to hear things that are not understood by them. So he speaks in a low, almost hushed voice of haunting terror, adding punch and gravity to his hallucinations and ghost stories, making his frightful experience seem real.

Almost everyone you speak to has some strange tale to tell about their contacts with a dead person. If you don’t believe that take note of what the popular psychics say, such as a James Van Praagh, and see how many calls they get on-the-air are about relatives communicating with those who are departed. Most psychics would say that the dead choose to communicate with those who are most receptive to them, and that they might just be asking for some help from someone not realizing that they are dead or they are trying to help someone they care about. I don’t think this film added much to our knowledge of the paranormal, but it was entertaining. 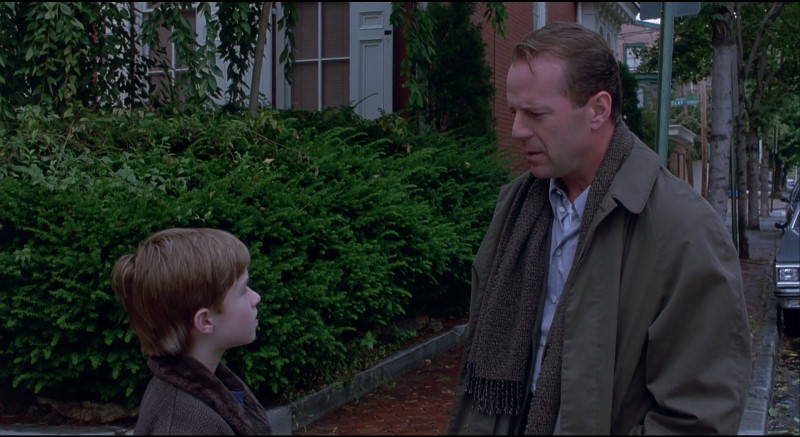