“Though far from one of the master director’s better films, it still has a few dazzling moments to be awed by.”

This was the third film of Ingmar Bergman (“Persona”/”Scenes from a Marriage”/”Cries and Whispers”) and it was the first to be released in the United States. It has an overripe complicated melodramatic story about four disparate souls whose lives need to be salvaged. They all happen to have some connection with an old tugboat that salvages wrecks (speaking about easy symbolic connections!). It’s adapted by Bergman from the play by Martin Söderhjelm. Though far from one of the master director’s better films, it still has a few dazzling moments to be awed by and touches on themes of alienation and loneliness he was to play around with in his long film career.

Johannes Blom (Birger Malmsten) is a sailor who returns to his hometown after being at sea for the last seven years and searches for Sally (Gertrud Fridh), the chorus girl he fell in love with but left behind because of family problems. When he meets her again, she’s depressed and living in a dumpy rooming house and no longer the ideal girl he thought about returning to for the last seven years. He learns from her that his estranged despotic father, Captain Blom (Holger Löwenadler), who never liked him because of his hunchback, died recently from pneumonia. After being rejected by Sally, who tells him she doesn’t want his pity Johannes takes a walk on the beach and recalls how he met Sally seven years ago.

Captain Blom one day brought the headliner showgal Sally on his salvage ship, humiliating his long-suffering wife of 25 years, Alice (Anna Lindahl), by openly having his mistress live on the tugboat. Johannes falls in love with her and she responds when she sees how heartless the captain is to his wife and son, and how the workers fear him but do not respect him.

In one prolonged flashback, the murky life changing events taking place on the tugboat are vividly recalled, bringing the viewer up to speed on why the four main characters show so many psychological ailments, suffer from isolation and angst.

Captain Blom can’t handle that he’s going blind and that his despised son he mocked all his life has stolen his pretty mistress; so he retreats in anger to his secret room (where he keeps model sail boats and dreams of escaping his life by sailing again). His son also can’t handle all the strife and ships out to sea after Sally returns to work for the same sleazy burlesque show owner she worked for before she quit to live on the tugboat.

In the plodding characterization of Captain Blom, he’s depicted as an unhappy camper who is boiling over with a psychological fever for being dockside all these years and living in a domestic nightmare; while his son becomes a man for standing up to the bullying tyrant and proving he can be a top-grade sailor on his own. A happy ending is patched together. After a night reflecting on the last seven years, a confident Johannes (seemingly with no longer a hump in his back) returns to the rooming house and takes Sally away with him as he boards his ship bound for India. 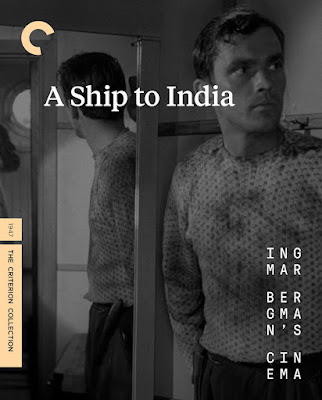