“Failed to convince me that Harrer moved from a self-absorbed bigot to an enlightened being, especially since his memoir never mentioned his Nazi past.”

The Frenchman Jean-Jacques Annaud (“The Lover”/”Quest for Fire”) directs a screenplay by Becky Johnston based on the 1953 memoir of Austrian mountain climber Heinrich Harrer. The film is hampered by so much of the story being about Harrer and since his story is not as impactful as the Tibetans and their plight and their highly evolved religious experiences, the film suffers for it. Scorsese’s Kundun is a more vivid and refreshing telling of the Tibetan story. It has become difficult to stomach Harrer now that it has become public he was an unapologetic Nazi (the filmmakers got that surprise while filming and had to deal with it, though aware of his cold personality beforehand). The octogenarian Harrer until recently had two big secrets: his Nazi past as a member of Hitler’s elite SS and his having left his unborn son for the sake of the Himalayan adventure. He now has none, and his first secret makes all the difference in the world.

Expert mountaineer Heinrich Harrer (Brad Pitt) forsakes his pregnant wife (Ingeborga Dapkunaite) in Austria to be part of an expedition to climb the unconquered Himalayan peak of Nanga Parbat during the onset of WW11 in 1939. The blue-eyed blond Harrer and his climbing partner Peter Aufschnaiter (David Thewlis) are captured by the Allied forces and held in a British POW camp in India. They soon escape and make their way to Lhasa, the Forbidden City in Tibet (forbidden to foreigners), where Peter finds a beautiful Tibetan wife (Lhakpa Tsamchoe) and Heinrich befriends the teenager Dalai Lama (Jamyang Jamtsho Wangchuk, the 14-year-old who does a remarkable job playing the Dalai Lama). The two bond and trade cultural nuggets while the Dalai Lama studies with the monks at the Potala Palace and shows an interest in things Western such as a movie theater. The Dalai Lama’s real sister Jetsun Pema, plays his mother in these scenes with real warmth.

Annaud concentrates more on the arrogant Harrer becoming mesmerized by the Tibetan culture and losing some of his haughtiness in the process than on the Tibetans and their problems in dealing with the invading Chinese Communists in 1950 and their looming crisis with them. The camerawork of the location shots, where the Andes stands in for the Himalayas, is stunning and convincing that Tibet is a special spiritual place, while the colorful costumes and glimpses from the elaborate built sets at how the Tibetans lived were delightful to behold (this epic cost $65 million to make). But the film lags dramatically and failed to convince me that Harrer moved from a self-absorbed bigot to an enlightened being, especially since his memoir never mentioned his Nazi past.

Seven Years In Tibet never climbs higher than being an airy spectacle as it lacks depth and emotional rectitude, and only sustains itself as a tour-guide pic that takes us through some of the world’s most beautiful and mysterious locations but doesn’t have much to say about these experiences in spiritual terms. 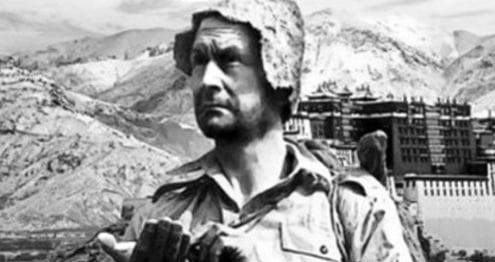