“Nothing to get upset about, but also not much to get excited about.”

The “true” story of Pall Mall, Tennessee, backwoodsman mountaineer farmer turned pacifist Alvin York, the most decorated soldier of World War I, who on October 8, 1918, single-handedly killed around 20 Germans and forced the surrender of 132 others in the battle of the Argonne. For more than 20 years Sergeant York refused to give his permission to tell his story but changed his mind with another World War on the horizon and with the urgings of producer Jesse L. Lasky that he owed it to his country, hoping his story would serve as a lesson for others conflicted about war. But York laid out a few conditions that had to be met such as York’s share of the profits would be contributed to a Bible School he had in mind, that no cigarette smoking actress could be chosen to play his wife and finally only Gary Cooper would play him. Only Cooper won the Best Actor Oscar and William Holmes for editing, even though the film was tops at the box-office for 1941 and was nominated for eleven Academy Awards. Howard Hawks was recruited by Cooper to be the director. But even the great Hawks couldn’t do much with the standard war film that was framed around a heap of moral pieties except keep it action-packed, stirring and patriotic. As a result Hawks received much praise for keeping it respectable but couldn’t do much with it artistically, making it his most successful grossing film but also the most uninteresting film he has done. York’s story, based on his diary, was used as propaganda for supporting the war.

It plays well in the first half showing York’s wild hell-raisin’ youthful rural upbringing and his transformation to pacifism after being struck by lightning, but falls into the routine category in the second half as it goes into battle scene mode leading to the famous battle finale termed as the “turkey shoot.”

In 1916 Mother York (Margaret Wycherly) asks Pastor Rosier Pile (Walter Brennan) to talk to Alvin about his poor behavior and he converts him by telling him to wrestle with the Devil. While hunting York meets teenager Gracie Williams (Joan Leslie) and tells her he’s fixing to marry her (which he will do after the war). York hopes to get good bottom land, but is angered when a rival beats him to it (the state will purchase the land for him after the war). In 1917 America goes to war and York when drafted applies for an exemption as a conscientious objector, but his appeal is turned down. Forced to go to boot camp, he proves to be an expert marksman but is not convinced he should kill anyone. But York lucks out as he has an understanding commanding officer Major Buxton (Stanley Ridges), who slowly convinces the young pacifist that fighting in a just war to defend the democratic principles of the country is the right thing to do. Promoted to corporal because of his marksmanship, the young man is conflicted about God and country but after reading a book the major gives him on his ten-day furlough agrees to do his duty as a soldier. After his heroics, he tells the major he killed in order to save lives.

It reflects a simpler time than the present when people were more innocent and were led to believe that this war would be the last one. The pic skirts any complexities and keeps things moving along with down home folksy touches and a straightforward firm belief in the war effort. Nothing to get upset about, but also not much to get excited about. 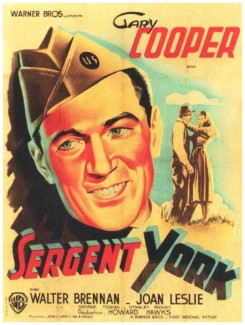