William Brent Bell(“The Boy”/”Brahms: The Boy II”) directs this promising horror pic that can’t deliver the goods, as it creates jump scares but ultimately it doesn’t make much sense as it tries to take the occult tract.

Writers Nick Amadeus Josh Braun tell about a Brooklyn family haunted by a murdered loved one returning as a ghost.

Comic book writer Jeff (Rupert Friend) co-wrote with his wife Maggie (Mamie Gummer) a comic book that was a hit. But that glory has long faded and he’s now unemployed, as his marriage sours and his wife must get a regular job for the family to survive. Mom takes their 8-year–old daughter Jenny (Violet McGraw) with her to work. Heeding the counsel of her influential and wealthy lawyer father, Rivers (Brian Cox), who can’t stand her husband, she files for a divorce and to get child custody. The embittered woman plans on moving far away so Jeff wouldn’t be able to see his daughter.

Wouldn’t you know it, Maggie is killed one day in a hit-and-run car accident, and Jeff retains custody of the daughter he loves. Jeff is helped in caring for Jenny by the babysitter Samantha (Madeline Brewer) he befriended.

The story revolves around the presence of a hostile ghost in the house, playing mind games with the kid.

Ready to reflect on the results of a bad marriage and the death of a family member, the story has the adult characters trying to say what they feel without listening to what the other party is feeling.

Its virtues are its competent visual artistry, but the story itself is flat, there are only a few scares that resonate (more creepy than scary) and the ending to this predicable horror pic, that’s aided by a twist, is awkward and unfulfilling. It seems as if the director lost interest in the plot and characters and let things turn on the appearance of a monster, a monster looking too much like the ones in recent horror pics. 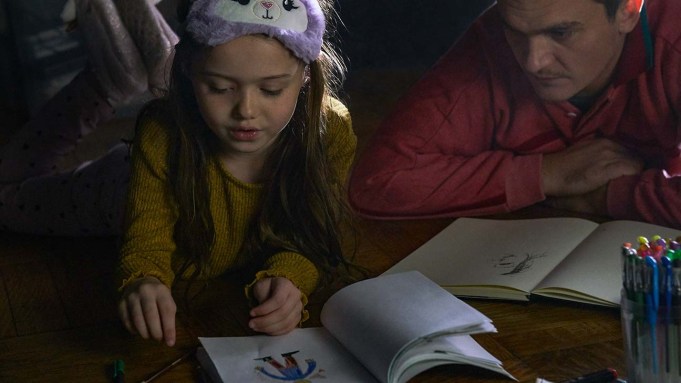