“The quintessential American film about what it once meant to be American.”

John Ford’s epic Western about America and its racial past is the quintessential American film about what it once meant to be American, more than any other film that I could think of and that includes Citizen Kane. It is Ford’s best, one that is much more than the Western it appears to be; it is a film that is about the self-discovery of a man’s love and hate and about his country’s past racism, seen symbolically through the eyes of one man, John Wayne. The Searchers tells of the perilous and obsessive 5-year quest to find 10-year-old Debbie, the niece of Ethan Edwards (John Wayne), who was abducted by a raiding Comanche party, under Chief Scar (Brandon).

The embittered Ethan arrives home in 1868 after serving in the Confederacy. He has been riding on his own for the last 3 years since the war is over, probably supporting himself by robbing banks (He does not explain how he got the bags of newly minted coin in his saddlebags). Ethan appears at the isolated Texas ranch of his brother Aaron (Coy) and his wife Martha (Jordan) and their three children–Ben (Lyden), Lucy (Pippa), and Debbie (Lana), and the part-Cherokee (one-eighth) son they adopted, Martin Pawley (Jeffrey Hunter), whose parents were slaughtered by Comanches and was found by Ethan.

Ethan treats Martin with utter disdain, saying he could take him for a half-breed, and refuses to have the child call him uncle. Soon after Ethan’s return, a raiding party under Chief Scar kills Aaron, Martha, and Ben. When this happened a posse with Ethan and Martin among them, was out looking for what they thought were rustlers. The Indians had abducted the two little girls, Debbie and Lucy.

Ethan searches for the girls with Martin and Brad (Harry), the boyfriend of Lucy. When Lucy is found dead by Ethan, Brad in a craze rushes off to charge the Indians and is killed. Ethan pushes on relentlessly following their trail, aiming to kill Debbie and her captor, Chief Scar, for violating her–declaring that once a white girl is captured by Comanches, she is no longer white. Martin goes along, so that he can prevent Ethan from doing something vengeful.

It is a psychologically dark story of a man who is heroic but filled with a bitterness that he can’t get out of his system. There is not one single actor in the world who could have played this part better than Wayne. His lone odyssey is of a self-assured rugged individualist, filled with racial hatred and love for his kin. It takes place in the beautifully photographed vistas of Monument Valley, where cinematographer Winton Hoch caught the mythic landscapes of the West, with its red earth and mesas, and all its splendor and ominous passages and isolation.

Ford threw the whole panoply of Western gear into The Searchers. There’sthe slapstick antics of Mose Harper (Worden), playing the Shakespearean fool, leading Wayne to the trail of Debbie twice, only asking in return to be taken home to sit by a fireplace in a rockin’ chair; there’s also the garrulous Texas Ranger Captain/Reverend Clayton (Ward Bond), who comically switches roles from gunfighter to man of peace without batting an eyelash.

The two main questions John Wayne faces are: What to do with Debbie? And, from the words in the Stan Jones ballad sung in the opening credits that asks, “What makes a man wander and turn his back on home?” The second question becomes, Will Wayne ever come home? In the opening scene, he is only there briefly and does not feel very comfortable in that short stay, even when idolized by the children. In the last scene when he finds redemption by not killing Debbie after he rescues her and raises her up in his arms, reminded in that split-second of how he held her as a child and thereby changes his mind and brings the 14-year-old home to his closest neighbors, the Jorgensen’s, to stay for good. But Wayne never crosses the doorway to his home; his home is in the past, just as is Chief Scar’s. It is a past that goes no further than the wars fought and the hatred ingrained in them. He will not go to California and will not advance civilization, he represents the past that must be put asunder before others can move on and turn the desert into farmland and ranches.

For Martin the quest will end in domesticity as he will marry Laurie (Vera Miles), the daughter of the Jorgensen’s. Wayne will be like the dead Comanche he shot the two eyes out of, forced to travel the spirit land forever, never finding a proper resting place.

Ethan does not belong to either the white settlers or the Indians. That he hates Indians so much yet speaks their language and feels comfortable with their ways more so than he does with white society, makes it difficult to figure why he has so much hatred for them.

Ethan’s disdain for society and home life is evident in the brooding figure he presented of himself when he first came home. Aaron is not as pleased to see him as is his wife, who it is implied once loved Ethan before she married. Ethan’s generosity to the children is shown by the gifts he gives them, a saber for Ben and his war medal to Debbie so that she can have something to wear around her neck just like the gold pendant he gave to Lucy when she was younger.

The John Wayne character is a complex one, wavering between his loves and hates. His story is visceral poetry. It’s a tragedy that turns ridiculous as Ford wanted it to be. There are unexpected psychological twists that can be read into the story by one’s own relationship with America. It is hard not to substitute Wayne’s hatred for Indians into a hatred for blacks, and it is easy to see how Wayne’s soul could be construed as America’s soul.

Make no mistake, this is not an ordinary or very good Western, this is undoubtedly a masterpiece of American cinema. It’s one that many of the early 1950s film critics couldn’t see. It is not that it is a particularly profound movie, but it is one that caught the emotions and the metaphors of a rich country with a paradoxical past and an intangible future. Over the years the status of this film has grown immeasurably, to the point that its anti-hero hero is now a fixture on the cinematic scene, along with the recognition that Ford has created a work that searches deeply into a man’s interior and into the country’s consciousness. If there was a more perceptive Western made, one that captured the visions of America better, I have not seen such a film. If there is such a film out there, I will take the liberty of using Wayne’s favorite retort: “That’ll be the day.” 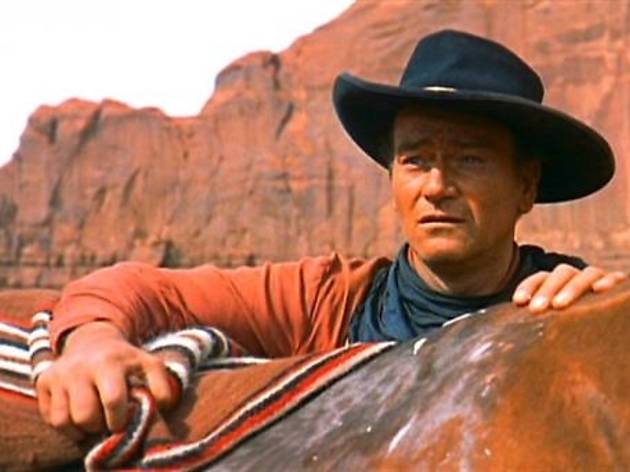