J-horror director Kiyoshi Kurosawa (“Cure”/”Charisma”/”Bright Future”) loosely bases his mind-bending psychological thriller, a made for TV movie, on Seance on a Wet Afternoon, a 1961 novel by Mark McShane which in 1964 was made into a film by Bryan Forbes. It’s really a routine B-film, but under Kurosawa’s richly stylized direction it’s kept moody, atmospheric and what seems only frivolous entertainment becomes something that’s more provocative. Otherwise the film feels clunky and contrived, as it stumbles along with unexplained plot points and seems only too willing to act as a shocker. But due to the coherent strength of the novel, the talented but sometimes too playful Kurosawa doesn’t go off on too many tangents as he usually does and thereby keeps the film tighter than his previous ones and it remains intact as a better than average horror/thriller.

Tokyo resident Sato (Koji Yakusho) is a mild-mannered sound effects engineer for a television company married to a self-doubting medium named Junko (Jun Fubuki), who works as a waitress and sometimes works with the police to solve complex crimes. Asked by a colleague to give him sounds of trees in the wind, Sato ventures out into the woods to record. At the same time an elementary school girl, Yoko, is kidnapped and escapes by running into the woods and jumping into Sato’s metal sound equipment box to hide from her kidnapper. Returning home and lifting the now much heavier equipment box into his car trunk doesn’t seem to get Sato’s attention (which makes him a lunkhead, in my book), and once home he doesn’t bother opening it but leaves it in his garage. Junko is called in by the police to see if she can give them any leads, and she’s given the girl’s hanky to take home. This allows her to sniff out the girl in the equipment box, who is unconscious (I guess she’s a fake but she does have some limited psychic power). The childless couple are locked into a drab marriage and the screwed-up Junko craves to make a name for herself in the psychic field and thereby be granted a renewed purpose to live a useful life with a flourishing career; therefore she talks her easygoing hubby into agreeing to work a scam on the police and not report they have located the little girl. They next plant the girl’s shoes at an abandoned industrial site just outside of Tokyo, and get complimented by the police for helping. Their plan is to lead the girl to the police alive by Junko showing off her psychic ability to bring up clues (but it’s not logical to expect that the girl would not relate what was happening to her to the police, as these unethical dummies think she’ll take it all in as a dream), but things go wrong and the couple finds themselves in deep trouble when Sato accidentally kills the girl to keep her quiet when the lead detective (Kitarou) visits their home and later Sato becomes haunted by the little girl’s ghost who causes him to have a meltdown.

You should like the film much better, I think, if you can somehow get over the weak story line by Tetsuya Onishi and Kurosawa and instead grok how the filmmaker superbly gets around the story’s inherent weaknesses by manipulating time and space in a uniquely inventive and stylish way, throws out Jungian terms to make sense of the doppelganger effect and thereby adds some much needed gravitas and, finally, hammers home how such an ordinary couple are pressed into doing something so evil because they are overtaken by their empty spiritual lives, selfishness, lack of intellect and vanity. 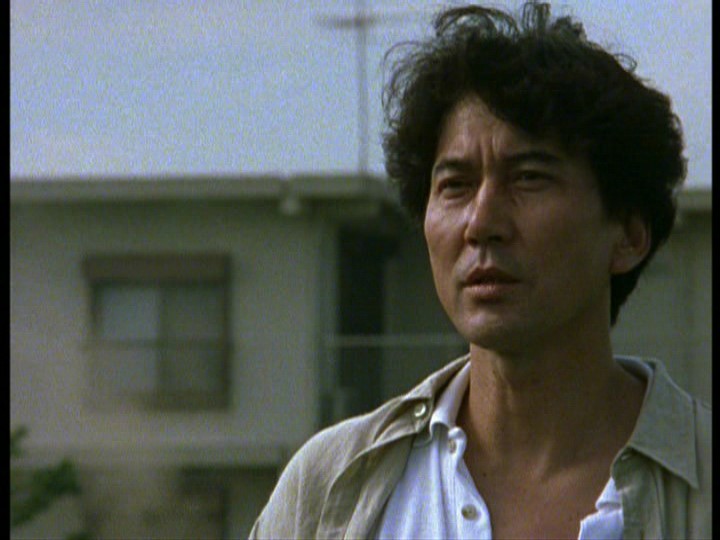