SEA INSIDE, THE (Mar adentro)

“Had its beautiful moments but also had its soap opera moments.”

The Sea Inside won the Oscar for Best Foreign Film. It’s the fictionalized melodramatic account of the true story of Galician ship mechanic, fisherman and poet Ramon Sampedro (Javier Bardem), a quadriplegic (paralyzed from the neck down) who fought a losing 30-year legal battle with the intransigent secular Spanish government for his right to die with dignity. In real-life, at the age of 55, Ramon committed suicide by drinking potassium cyanide in an elaborate schemed assisted suicide with as many as 10 people. No one was implicated in the illegal act that was videotaped and shown on TV.

Ramon was 26 when he mistakenly dove into the shallow part of the ocean and broke his neck. For over 29 years he was bedridden, able to mentally function but unable to move or feel anything below his neck. He lived in his sour brother José’s (Celso Bugallo) modest house in the rural Galician town of Coruña (constantly facing Jose’s angry opposition to his efforts at an assisted suicide), where he was primarily cared for by his loving sister-in-law Manuela (Mabel Rivera). Despondent because he was dependent on the generosity of others for his survival and feeling that his life was pointless, the thoughtful Ramon weighs all his options to live as full a life as possible and does so primarily through his rich imagination (at one point, in the film’s only fantasy scene, Ramon dreams he leaps out of his bedroom window to fly like a bird) and his ability to be inventive (creating with the help of his concerned but doddering elderly father (Joan Dalmau) and his teenaged techie-minded nephew Javi (Tamar Novas), a custom-made computer where he writes by mouth-control his stinging poetry book “Letters From Hell”).

Ramon also still has a very strong connection with the sea through his imagination (giving the film its most lyrical moments), even though he no longer lives near the sea. And, he maintains some strong outside relationships, which become the heart of the film, such as with Gené (Carla Segura), a friend who works with a “Right to Die” organization but is not allowed by law to assist in his suicide. Through Gené he obtains Julia (Belen Rueda) and Marc (Francesc Garrido) to be his lawyers. Julia is soon diagnosed with a degenerative disease and though married to a sensitive man becomes Ramon’s romantic interest because they have so much in common. Marc alone brings his case to court and in the process wins Gené’s hand in marriage. Rosa (Lola Dueñas) is a single mom of two children, a factory worker and part-time radio DJ, who visits Ramon seeking a friendly relationship after he is interviewed on TV. Through a growing platonic relationship she finds a sense of purpose and a true love, and realizes that she can’t convince him that life is worth living. The veteran screen actress Dueñas’s performance was memorable, giving her character a multi-dimensional voice that hit on feelings rather than intellect. Though the film belongs to the 35-year-old Javier Bardem, made to look like a 55-year-old, who gives one of those once in a lifetime genuinely great performances that is both subtle and magnetic. And, he does it for the most part while bedridden.

The film is about euthanasia (a subject not fit for all tastes and not usually a theme made welcome in most mall theaters), but it’s also romantic, humorous, intelligent, and very much issue orientated with the filmmaker understandably sympathetic to the protagonist. The characters are admittedly schematically drawn, advocates of every phase of the controversial issue, but in today’s divisive climate their lucid voices need to be heard even if their arguments are old hat or in one case seemingly ridiculous like that of the dogmatic ‘pro life’ quadriplegic preaching Jesuit priest. The subject of assisted suicides is only picking up steam in the public arena as it has already been made into a political football to be kicked around by certain religions, activist groups, and politicians. For those who stick this one out, there’s something special to be gained in tuning in to the subtle arguments about what it means to live without freedom and if it’s worth living in such a dependent and undignified way. It clearly shows why Ramon wants to check out but those around him wish he won’t for various reasons.

It’s directed in a straightforward earnest but not didactic manner by Alejandro Amenabar (“Thesis”/”Open Your Eyes”/”The Others”), whose other films were in extreme opposite styles–being testaments to his arty skills, ability to be surreal and mysterious, and offer insubstantial stylish thrillers with gimmicky surprise endings. This is the kind of respectable film done with taste and purpose his other films lacked, but it does lack an edge and a way for us to be more moved by such an emotionally gripping story that had its beautiful moments but also had its soap opera moments. 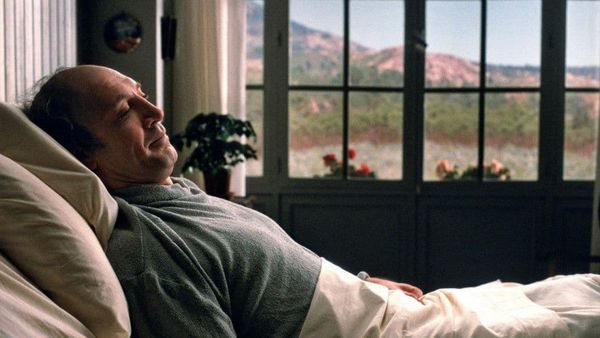