A faithful retelling of Charles Dickens’s 1843 Victorian classic novella “A Christmas Carol.” It’s shot in b/w. It was released in England by Twickenham Studios in 1935, as the first feature-length talkie adaptation of the Dickens classic. The able director is Henry Edwards (“Juggernaut”/”In The Soup”/”The Lad”). The character of Scrooge is played by the eminent British stage actor and playwright, Sir Seymour Hicks, who was born in 1871. The material for Scrooge was based on a stage version of A Christmas Carol, in which Hicks played his signature role of Scrooge. Hicks also was Scrooge in the silent movie version in 1913.

The familiar Victorian moralistic story is about a London miser, Ebenezer Scrooge (Seymour Hicks), who on Christmas Eve is visited by three ghosts, the Ghosts of Christmas Past (Marie Ney), Present (Oscar Asche) and Future (C. V. France), who haunt him and finally convince him to mend his mean-spirited ways and join the human race in celebrating the true meaning of Christmas.

It’s not as good as the Alastair Sim 1951 version, but despite being too sentimental it offers solid performances (Hicks is good at doing the nasty). It’s a decent holiday watch for the entire family. 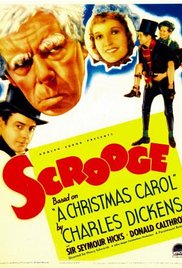