A fascinating seven-hour epic black comedy in entropy (ponderous musings on misery and despair) by the internationally acclaimed Hungarian director Béla Tarr (“Werckmeister Harmonies”/”Almanac of Fall”/”Damnation”), filmed in 12 chapters, that stands out as one of the best films of the last century that few have seen because of its unavailability and also perhaps some were scared off by its reputed slow and tedious pace. It tells about the last gasps of Communism in Hungary, and is viewed in a struggling unnamed backwater Hungarian agricultural collective where a group of embittered losers are clueless about what’s to happen to them with the collapse of their Communist utopia but receive some hope when a quasi-messianic figure of a questionable character despite his idealistic views (Mihály Vig) seemingly returns from the dead with his loyal assistant (Putyi Horváth) after a long absence with a plan to have them pool together their resources (their year’s wages) and work together on a model farm based on the principles of capitalism.

The dramatization, as a slice of real life, is mesmerizing in its long lulls and in the real time of its presentation; the black-and-white film is shot in such a unique visionary way that it defies classification even though Tarr was influenced by the American filmmaker Cassavetes in his use of long close-ups and also he can be viewed as the apparent heir to his fellow Eastern European state-subsidized filmmakers Miklós Jancsó and Andre Tarkovsky— following along in their graceful sweeping big statements and apocalyptic works.

This is Tarr’s most ambitious, composed and realized work to date. It only suffers because it’s so lengthy, a very demanding and probably a not very entertaining watch for the casual viewer (there’s no denying this one demands the viewer’s full attention and concentration), and it hasn’t received as much attention as it should have, even from respected critics, because it had such a limited theater release in America (mostly short stints at festivals or at art museums) and so far a DVD only released on PAL in Europe.

It’s edited by Agnes Hranitzky, Tarr’s partner in life, and is based on the novel by László Krasznahorkai, who cowrote the screenplay with Tarr.

The bleak collective is shown with mooing cows, muddy fields, a dreary landscape, rundown farm houses, an almost constant fall rain, and a group of unpleasant and untrusting hapless peasant farmers who are drunks, spies, cheats, gossips, cheerless souls and accept their doom as inevitable as they are unable to help themselves out of their impoverished hell. It follows the structure of the novel, where a tango was used: six steps forward, six steps back. In this case it was linked to Satan’s tango, as the film looms as an episodic time-dance into oblivion.

It has set pieces that underscore the group’s inertia and penchant for ugliness. We view a drunken collection of bar patrons dancing to accordion music in a long drawn out scene and some time later the same scene is repeated but eerily one of the dancers from the previous scene committed suicide, as the giddy dancing goes on despite the tragedy as dancing is viewed as the only soft spot in the lives of these miserable souls. There’s a troubling scene where a police captain questions two shady members of the collective, reinforcing the prevalent sense of hopelessness. A lost 10-year-old girl (Erika Bok) occupies her perilous time by torturing a cat while mom patronizes a bar and then takes her life with the same poison she gave the cat. The local doctor (Peter Berling), who takes note of the tense encounters of those in the collective by being an active snoop, is always drunk on fruit brandy and has given up any hope to even reclaim some human dignity for himself. After seven hours of visiting this isolated downer collective farm (a visit that seemed like it would never end), it turns out that the tale is simply an allegory for Communism’s ineffectiveness (the reason for its collapse) and the let down to come when it will be discovered that capitalism is also not the answer to save these tortured souls, who are too lost in their own weak character, emotional withdrawal and lack of perception to ever see the light of saving themselves from their mental pain, greediness and criminal nature. 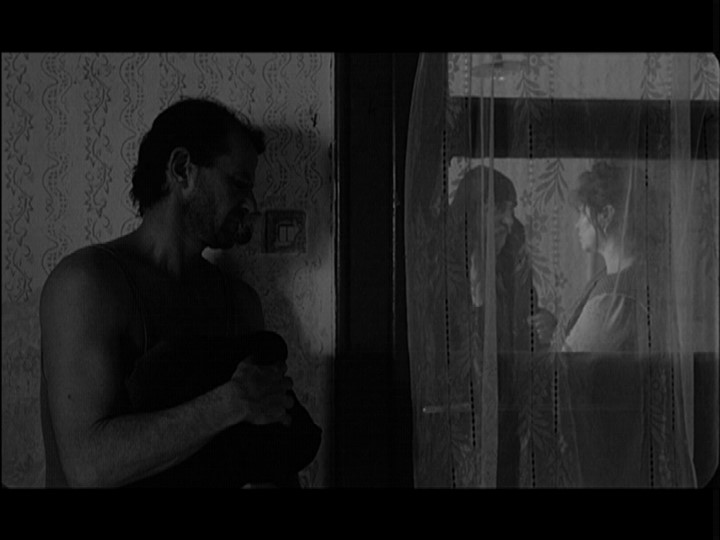