A silly screwball comedy directed by Rainer Werner Fassbinder that pokes fun at intellectuals and in its darkest moments mockingly celebrates literary theft as the right of the superior artist. It was made just after his stock company disbanded (there are still many familiar faces in this disparaging movie). It pays homage to Antonin Artaud’s Theatre of Cruelty (with his cruelty being metaphysical, but used in the film as savage humor), opening and closing with a pessimistic quote from him about the human condition. The narrative reverses the filmmaker’s usual ‘victim’ formula in favor of the vic protagonist being a tyrant but in the end it’s discovered he enjoys being abused. It takes a different style than Fassbinder’s other more serious and stylized theatrical melodramatic ventures, as it’s bursting with manic energy and excesses in perversion and outlandish gaiety. The buffoonish characters could fill a nut house, as they are a collection of loonies, freaks and perverts.

Walter Kranz (Kurt Raab) is a famous avant-garde poet of the left suffering from writer’s block. His publisher refuses to give the hysterical poet any more advances until he hands in something. Faced with money problems, the poet borrows from friends without ever paying back and steals from anyone. His harpy wife Luise (Helen Vita) complains he hasn’t balled her for seventeen days and gives her no money to shop. The couple live with his mentally challenged brother Ernst (Volker Spengler), who obsessively collects flies (he even tries to fuck them) and loves to get beaten by Walter. The poet’s friend Rolf (Marquard Bohm) doesn’t mind if he balls his wife Lisa (Ingrid Caven) if he pays his debts. While leaving Lisa’s place he bumps into his mistress Irmgart von Witzleben (Katherina Buchhammer), a woman who adores him when he spits on her and rapes her. While having an orgasm, she writes him a check for his stud service and he repays her by shooting her. The detective Lauf (Ulli Lommel) suspects the poet and searches his house for the pistol, not believing Lisa’s alibi that during the time of the crime they were doing it on the floor. The poet with his new found money hires an Oriental whore (Y Sa Lo) to interview as a research project for a possible book, and during the interview screws her in front of his wife and brother. Walter, after a two year slump, breaks out of his writer’s block when through his dreams he accidentally lifts the complete works of homosexual German poet Stefan George, a late 19th and early 20th century poet (a bridge between the 19th century formal style and German Modernism) specializing in aristocratic poetry that he only reads in certain refined circles so as to keep its purity. Walter passes the poems off as his until his wife tells him he plagiarized it, but he can’t stop believing that he’s George. He begins to dress like him and hires four young gay men to sit around as admirers and hear him read poetry while they fawn over him (just like he imagines George did it). Since the poet is surrounded by such inferiors, no one recognizes the theft. A lady admirer Andrée (Margit Carstensen) worships him and welcomes the way he abuses her (letting Ernst rape the virgin and having her walk the streets during winter in a summer dress). The groupy is not rich but pays him to move into his flat. Walter tries to make it in the gay scene by picking up a male hustler in a men’s room and there’s an amusing scene as he tries for the first time to get it on with a man. After stealing from one person too many, Walter gets severely beaten by thugs and Andrée discovers him lying in the street and laughing with joy, and for the first time feels humiliated that she was fooled into thinking he was a tyrant when he’s only a weakling like herself. It all ends on a happy note when Andrée leaves to hook up with Rolf and Lisa moves in with him when his outspoken wife suddenly dies. Walter turns in a novel entitled “No Ceremony for the Fuhrer’s Dead Dog” and the publisher is pleased the book is not the usual revolutionary junk he writes.

This is an odd film for the director, whose usual film has no uproarious laughs (a wry sense of humor usually surfaces) while this one is filled wall-to-wall with slapstick comedy. It suffers when it gets too bogged down in its own absurdity and the jokes begin to wear thin. But Fassbinder still manages to get across a few serious points such as sticking it to the established artistic scene by his revolting portrait of George and how it is money not art that spurs on the commercial art scene. It was enjoyable as offbeat entertainment from a director who is not afraid to take chances and change his filming style. 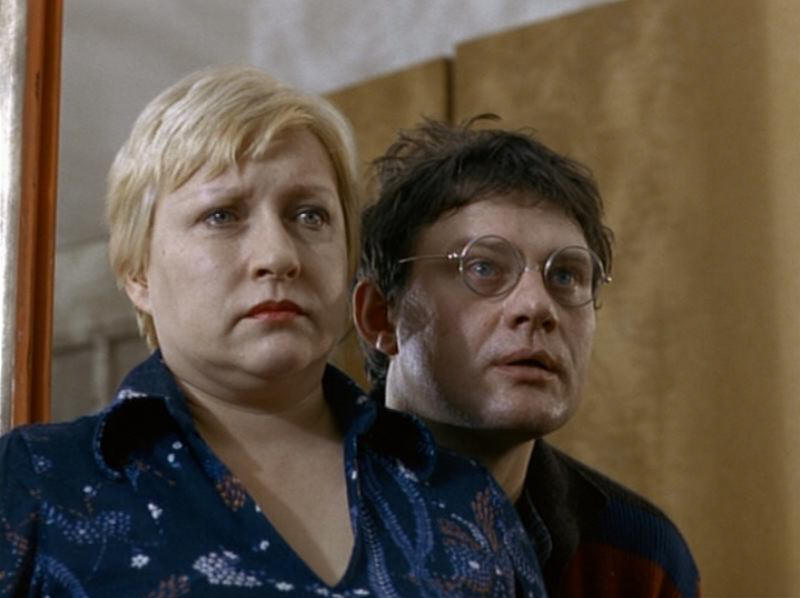