“This tacky attempt to make a kidpic about the Christmas spirit seems too retarded for even kids who will watch anything silly.”

This tacky attempt to make a kidpic about the Christmas spirit seems too retarded for even kids who will watch anything silly. It should even sour for those kids who might lack any discretion due to the genetic effects of brain damage or those suffering from TV deprivation because of Taliban influences or those sorely deficient due to the decline of educational standards in our urban schools.

The 8-year-old Pia Zadora made her film debut as a Martian girl named Girmar, and she will go on to prove as an adult actress that she has retained the knack to land parts in bad films that call for her to pout. Adults can only wince at this Santa space fantasy kidnapping, and fight boredom and incredulity. To get through this flick they must find something to laugh about and the following should do the trick: the lame special effects (Martians with antennas on their heads and sets made out of cardboard), tasteless dialog (Santa calling one of his reindeer Nixon), and absurd plot twists (having an automated Santa workshop in Mars and four kids with toys easily besting an evil adult with a disintegrating ray gun who tries to eliminate them while the non-violent Santa sits back and chuckles at all this).

Santa even cracks a few jokes, my favorite is when Santa asks: What’s soft and green and put over a fire? Answer: A Martianmallow. Ho, ho, ho!

It achieved cult status when named high on the list in the book “The Fifty Worst Movies of all Time.” I wouldn’t go that far, it’s just not what you would call a mainstream Christmas favorite that becomes essential to view during the holidays, like Bing Crosby in “White Christmas.”

On KID TV there’s a visit to Santa’s North Pole workshop where an interviewer sees the busy Santa helper, Winky, make a Martian toy. All Santa’s helpers are busy because the Christmas season is coming soon, and Santa is happily puffing away on his pipe before he makes his Christmas rounds.

The story switches to Mars and their chief Kimar and his wife Momar are concerned that their kids, Bomar and Girmar, suddenly can’t sleep or eat, and feel depressed. All the Martians have green paint on their face, and all the kids do is watch Earth TV programs to the displeasure of the parents. The chief asks his wise man Chochem what to do. He says the kids are unhappy because they are programmed to go straight to adulthood and bypass their childhood fun. He says that fun must be brought to the kids of Mars, and he suggests bringing the Earth’s Santa to get the kids into a Christmas mood. Kimar prepares to take a spaceship with a few Martians as part of a raiding party to abduct Santa. Voldar is the only one who objects, he doesn’t believe in fun, toys, laughter, or Santa. He will spend the rest of his film time trying to sabotage Santa’s efforts and those of his leader to bring cheer to the kids of Mars.

When the Martians land in the USA, they’re confused when they see hundreds of Santas on the street and don’t know who is the real Santa. To help them they abduct 10-year-old Billy and his 8-year-old sister Betty, who tell them the real Santa is in the North Pole.

Kimar cleverly uses the robot Torg to abduct Santa, but the cheerful Santa turns the robot into a toy. So the Martians storm into Santa’s workplace to zap Mrs. Claus and all the helpers with a sleep spray, and they whisk Santa and the kids away to Mars.

Santa is such a jolly fellow that he goes along with this Martian joke and prepares to make the kids on Mars happy. He finds Kimar’s goofy assistant Dropo who is a lazy sort, to be perfect as the future Martian Santa. Dropo likes all of the following: kids, to laugh, and making toys. He gets fat instantly by stuffing a pillow inside his Santa costume and gradually will become obese the natural way by stuffing himself on chocolate ice cream and cakes that are served in the form of a pill.

Santa spreads good will and cheer to the Martians and is released to Earth with Billy and Betty, as Dropo is approved by all as the official Martian Santa. The film ends with its theme song “Hooray for Santa Claus,” which goes something like this: “Hoo-ray for Santy Claus/Yea yea for Santy Claus/. . .When we hear sleigh bells ring/Our hearts go ting-a-ling!” Surprisingly, to the filmmakers, it never caught on as a holiday favorite.

This is a Christmas film by Nick Webster (Red Planet Mars) that is highly recommended for those film buffs who love really bad films (the kind that are worth salivating over because they are really bad). 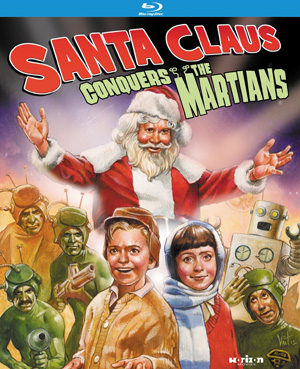