“There’s not a lot of bite to this satirical musical, but Resnais has never made a bad film…”

The renown 77-year-old French surrealist director, Alain Resnais (Hiroshima, Mon Amour/Last Year at Marienbad/Mélo), has created a lighthearted musical played as an homage to Britisher Dennis Potter and his Pennies from Heaven (1978 TV serial, 1981 movie) and The Singing Detective (1986). The film follows Potter’s gimmicky style of having the characters jump into lip-synched old or contemporary (in this case French) pop songs to express their private thoughts. He also follows the kind of sweet and colorful musicals his fellow countryman Jacques Demy loved to direct, such as “The Umbrellas of Cherbourg“and”The Young Girls of Rochefort.”

The tale has Resnais’s unique touches to go along with his satire about class differences and falling in love with the wrong person. What hinders this production is that the stars are not portraying particularly engaging characters, the songs are not memorable and stand little chance of being recognized by an American audience (the exceptions might be the Edith Piaf and Maurice Chevalier numbers), and the farce seems more banal than daring.

Yet it is not without its striking moments and charms, such as when Jane Birkin does a cameo and sings one of her own songs. The glossy amberlike photography added a very French romantic feeling to the story. The mood of Paris as being a place for love to flourish above all else, comes through with flying colors. It also does a good job of showing you the way Paris is in the 1990s and in the way ordinary people exist there.

It tells the romantic story of six Parisians who become intertwined with each other in their ordinary lives. They are the attractive sisters Odile (Sabine Azéma) and Camille (Agnes Jaoui). The older businesswoman Odile is married and decidedly set on a bourgeois life. She is married to the glum and laconic Claude (Pierre Arditi). She once went out with a businessman, Nicolas (Jean-Pierre Bacri), who left her eight years ago and now shows up in Paris and asks her help to find someone to rent a flat for his family. Simon (Andre Dussolier) works as a real-estate salesman and is trying to find Nicolas a flat for his family, in his spare time Simon writes radio plays. Simon’s boss is the much younger, unscrupulous and arrogant Marc Duveyrier (Lambert Wilson), who inherited the firm from his father and is the real-estate agent selling a more luxurious and larger flat with a better view to Odile; but, he fails to tell her that a building project is going up soon that will block her view.

Screenwriters and actors Jean-Pierre Bacri and Agnes Jaoui wrote themselves the best parts. Jaoui’s Camille is a university scholar finishing up a Ph.D. in history, using for her thesis the study of ‘the yeomen in the year 1000 at Lake Paladru.’ She works as a tour guide in the meantime and suffers from panic attacks, even though she appears to have outwardly perfect self-control. Simon has taken her tours for the last four years, pretending to be doing research for his plays but is really attracted to her. But he does not have the nerve to tell her how he feels. To his dismay he finds out she is starting to date his mean-spirited but handsome boss, whom she meets at her sister’s new place and is attracted to him when she sees him crying. She does not realize that he was crying because of a cold and not because he’s so sensitive.

Bacri turns out to be now working as a chauffeur. He is a hypochondriac with a history of depression who visits many doctors, until he finds one who tells him there is nothing wrong with him. Odile still pines for him but he’s married and tells her he expects his wife to arrive shortly.

Love is ‘the same old song’ that makes the world go ’round, even when all the characters are liars and not exactly open to what are their true motives. Everything comes together in a bourgeois housewarming party for Odile’s new place, as the characters reveal their true feelings and all their deceptions and neurotic impulses are either uncovered or about to be.

There’s not a lot of bite to this satirical musical, but Resnais has never made a bad film; he is one of the best of the current French directors, if not the best. This film is not one of his great ones, but it still has enough pep in its light touches to be interesting. It has an odd way for the characters to break into song — some males even sing in a female voice and some females in a male voice. It is also interesting in the way it examines its characters’ behavior as being similar in business as in love. 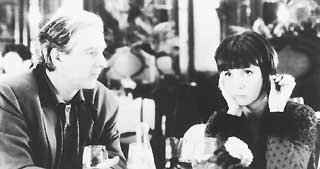