RUN OF THE ARROW

Sam Fuller (“Forty Guns”/”Park Row”/”The Steel Helmet”) directs in his usual visceral and primitive style this bloody western about national identity, that tells how an imperfect country must be reborn after the Confederates surrender to the Union at Appomattox on April 9, 1865. Irish American Confederate private, with the Virginia Infantry, O’Meara (Rod Steiger), fires the last shot of the war, wounding Union Lt. Driscoll (Ralph Meeker) and rather than let him bleed to death on the field, O’Meara carries him to be saved to the Confederate field hospital at Appomattox. O’Meara is given the bullet as a reminder that he missed, and wears it around his neck as a war trophy. Filled with hatred toward the Yankee soldiers and no longer wanting to be an American in peacetime, O’Meara goes West to join the Sioux. On the mountain trail he meets an old Oglala scout named Walking Coyote (Jay C. Flippen), attired in a Union uniform, and is mentored by him in the Sioux customs. Walking Coyote is going home to die with his people and is taking the sore-loser Rebel to meet his chief, Blue Buffalo (Charles Bronson), when they are captured by the renegade war thumping Sioux Crazy Wolf (H. M. Wynant) and his warriors. Before the Indians butcher their two captives, Walking Coyote’s request is honored to have a go at the “run of the arrow.” The ritual gives the captives a slim chance of escape, as the Indians fire an arrow that gives the prisoners a head start before pursued. We’re told no one has ever survived this ritual. After Walking Coyote dies while fleeing, a collapsed O’Meara is rescued on the trail by Yellow Moccasin (Sarita Montiel, dubbed by Angie Dickinson) and nursed back to health in the tribal village of Blue Buffalo. When Crazy Wolf spots O’Meara with Blue Buffalo, he abides by the custom that no Sioux may kill one who has survived the run. O’Meara then talks Blue Buffalo into letting him join the Sioux nation as a full fledged Sioux, and he takes Yellow Moccassin as his squaw. The couple adopt the mute orphan youngster Silent Tongue (Billy Miller), and O’Meara is content to live as an Indian. When Sioux chief Red Cloud (Frank DeKova) allows, as a peaceful gesture, the Cavalry to build a fort in the Sioux territory, O’Meara acts as a scout for the army engineers, led by the perceptive Captain Clark (Brian Keith). After locating the spot agreed upon by both parties to build the fort, the war hungry renegade Crazy Wolf attacks. In the attack Clark is killed and the maniacally ambitious Indian hater Lt. Driscol, the same one shot and saved by O’Meara, takes charge and disobeys orders on where to build the fort. Driscoll orders a new site for the fort that’s off-limits according the pact between the two parties. It results in the entire Sioux nation attacking the new fort and the captured Driscoll is severely tortured by being skinned alive. O’Meara can’t bear the cruelty and uses the same bullet he fired at Driscoll in the opening scene to shoot him and put him out of his misery. Realizing he can’t be someone he’s not, O’Meara leaves the Sioux nation to return to an uncertain future in America.

The forceful, in your face, pic doesn’t always work in explaining Indian lore and doesn’t break new ground in how to make a cowboy and Indian film, but what it does well is give us an excellent soul-searching look at an unsympathetic anti-hero and humanizes him into someone we might even respect for his courage. The Steiger method acting performance is not for all tastes, but his vigorous performance gets us to see he’s a troubled man who can’t escape from his troubled roots. O’Meara is a symbol for all the intransigent Confederate bigots who are unaccepting and guilt-ridden about losing the war but who must be reintegrated back into America for the country to survive without rancor. Fuller follows O’Meara’s maddening trek to find himself before it’s too late to be found, allowing us to see how difficult it would be for the losers, if not given another chance, to again become Americans. ‘Dances with Wolves’ borrowed its theme from this pic, but this low-budget pic had a power far greater than the big-budget pic and was the more interesting film. 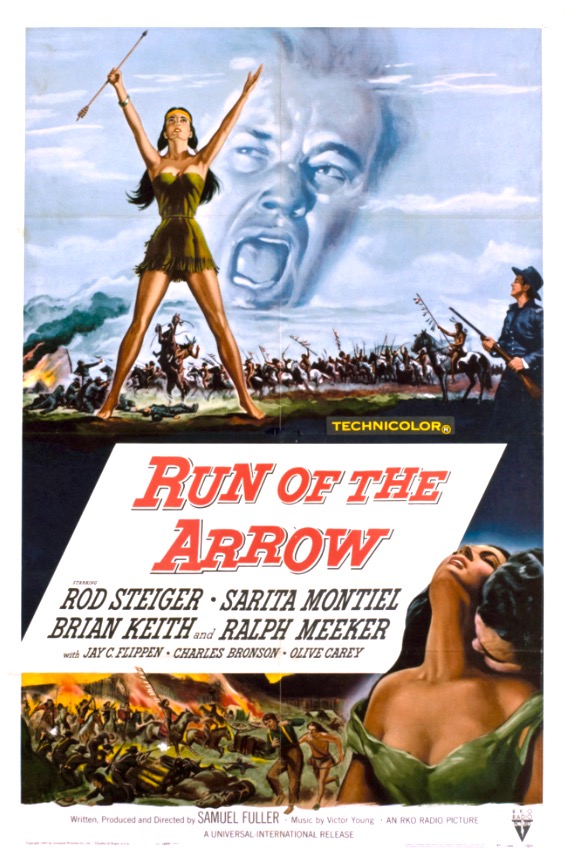