“It’s the kind of dumb movie where you are encouraged to laugh at the pathetic losers on the screen.”

The concept for writer-director Josh Becker’s thriller is borrowed from Hitchcock’s Rope (1948), where there is the illusion given that Running Time was in one continuous shot–filmed in real time (in the DVD commentary it’s revealed there’s a total of 30 cuts). It’s the kind of dumb movie where you are encouraged to laugh at the pathetic losers on the screen. Bruce Campbell is the star; a cult hero from such B-film wonders as The Evil Dead and Army of Darkness. His robotic acting is so lamentable that it’s actually remarkable in a manner of speaking. Don’t ask about the others and I won’t tell. But shootingit in Los Angeles in agritty black and white photography turned out to be a good idea, as it gives it both a realistic documentary and urban thriller look. Unfortunately, there was no way to cover up for the violent action scenes that looked more silly and fake than frightening.

After serving 5 years out of a 10 year sentence, Carl (Bruce Campbell) is being released early due to good behavior. The inflated warden gives him a pep talk and a Havana cigar and Carl in turn informs the warden that he’ll be going into the laundry business with a partner, using his experience gained in the prison laundry room. Carl is walked to the prison gate and told by the surly guard that he’ll be back. Outside the gate he is met by his old high school football buddy and former crime partner Patrick (Jeremy Roberts) in a battered van. Carl never snitched that it was Patrick’s gun used in the holdup he served time for, and feels his buddy owes him one. In back of the van is a hooker named Janie (Anita Barone), with whom he has a quickie. It suddenly dawns on him that he knows her from high school, some 15 years ago, but can’t recall anything about her. Janie then remembers they dated for a week but he dumped her after screwing her in a car without a condom, which made her go into a rant which caused him to leave. The men drop Janie off, but not before she gives Carl her home number for another chance at true romance. The men are in a hurry to get to their destination in time and pull a heist of the warden’s private laundry operation pickup spot he secretly runs from inside the prison. He uses the prisoners as slave laborers and because it’s cheaper for them, the local laundromats pay the warden to do their laundry. Carl came up with the foolproof plan inside of prison to rob the laundromat pickup spot, where he expects $25,000 in the safe. Along the way they pick up a strung-out junkie, Donny (Gordon Jennison), to be their getaway driver, and, Buzz (Stan Davis), a safecracker, Carl’s former prison cellmate. Soon everything goes wrong, from a flat tire, the junkie having no watch and when he borrows Buzz’s can’t set it properly. The watch is important since the robbery depends on precision timing. While the robbery is going down, they discover it’s a different safe and Buzz is having trouble opening it. This causes Carl to vent that Patrick is a fuck-up, as he was supposed to have cased the place first. The two can’t stop bickering and their arguments take them back to misunderstandings from their high school days. When an old security guard goes for the door the jerky Patrick kills him and one of the hostages, the laundry-mat manager, has a heart attack.

It now becomes a question if they can pull off the so-called piece of cake heist in twenty minutes before the armed prison guards show, and if Carl will choose after the heist to be with his friend or old girlfriend.

A fun movie that is made primarily for the straight to video crowd and those cultists a little bent out of shape when it comes to their upstairs plumbing. 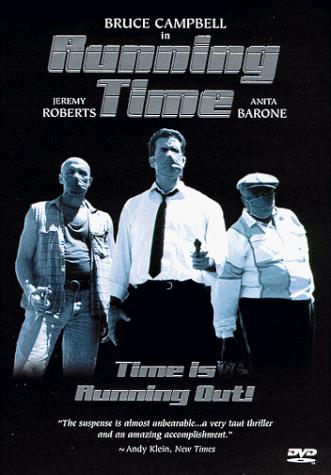