“In spots a very amusing and irreverent tongue-in-cheek satire on class that features a tour de force performance by Peter O’Toole.”

In spots a very amusing and irreverent tongue-in-cheek satire on class that features a tour de force performance by Peter O’Toole, but it doesn’t have anything warm about it. It’s based on a play by Peter Barnes, who cowrites it with Hungarian-born director Peter Medak (“The Krays”/”Let Him Have It”/”Romeo Is Bleeding”). Among the many things it targets are British chauvinism, British institutions, British mores, upper-class hypocrisy over sex and the elite’s hatred of left-wingers. The film suffers from being overlong and by the second half its political jokes have become too obvious and repetitive (it stays too long making the same points); also a silliness (the characters are apt to break into song at any time) mixed with the bloody macabre settles in that could have been handled more delicately with a better pruning job.

It opens with the secretively fetishistic 13th Earl of Gurney (Harry Andrews), Ralph Gurney, accidentally hanging himself while dressed in a military tunic, a Napoleonic hat and a ballet tutu during his usual nightly ritual. Sir Charles Gurney (William Mervyn), the half-brother of the deceased, is shocked to learn that Ralph’s mental case son, Jack Gurney (Peter O’Toole), who thinks of himself as Jesus Christ and has spent the last eight years in a private sanitarium, has become the successor and heir to the Gurney Manor and that the 14th Earl of Gurney will have no legal guardian. Since his commitment to the rest home was on a voluntary basis, Jack’s treating shrink, Dr. Herder (Michael Bryant), a German (ridiculed for not being a true Englishman and therefore is not to be trusted), cannot force him to stay even though he’s far from cured. Sir Charles schemes to get his loony nephew married to his low-class upwardly aspiring music-hall mistress Grace Shelley (Carolyn Seymour) and for the couple to have a male heir and then he will commit Jack to a mental institution and take over running the manor until the heir comes of age. Grace poses as the French opera singer, The Lady of the Camelias, someone Jack believes he’s already married to and Sir Charles’ doddering brother-in-law bishop (Alastair Sim) reluctantly marries them even though he knows Jack’s not all there. Jack’s preaching love turns off everyone in his family, and his unusual way of relaxing to stretch out on a giant cross in the main room raises eyebrows but since he seems harmless he’s tolerated as long as he doesn’t venture outside of Gurney Manor to embarrass the family. Others in the manor include Charles’s wily sex starved wife Lady Claire (Coral Browne), who tries to seduce Jack when word gets out there’s nothing wrong with his ability to perform sex and then she seduces the willing shrink. Dr. Herder thinks he can cure his patient if he can get him to admit that his name is Jack, and brings for a house visit the Electric Messiah (Nigel Green) to shock him out of believing he’s God. Jack is cured by this ludicrous treatment of his messianic complex and declared normal again. The only problem is that he now takes on the personality of Jack the Ripper and goes on a killing spree. The poor butler, Tucker (Arthur Lowe), a closet Communist, who has been enjoying himself immensely since he inherited 30,000 pounds while the rest of the snobby family was stiffed, stays around only because of Jack’s father’s request to make sure his son is treated well. But after one of Jack’s murders, Tucker gets accused of the crime because the cops found that he reads commie books and Jack–now reserved, polite and haughty–points an accusing finger at him. Sir Charles’s dopey but politically ambitious son, Dinsdale (James Villiers), now takes a liking to Jack as someone he can ally himself with to help him in Parliament. It leads to Jack taking his seat in the House of Lords and giving a talk on bringing back law and order to England by bringing back hangings, and he receives a standing ovation and immediate acceptance into the upper-class club as one of the boys. The implication is that when Jack was into his universal flower-power love trip he was actually more sane than any politician or member of the upper-class seems a bit naïve and one of the beliefs fleshed out from the 1960s that probably turned as many people off as on to such thoughtless convictions. 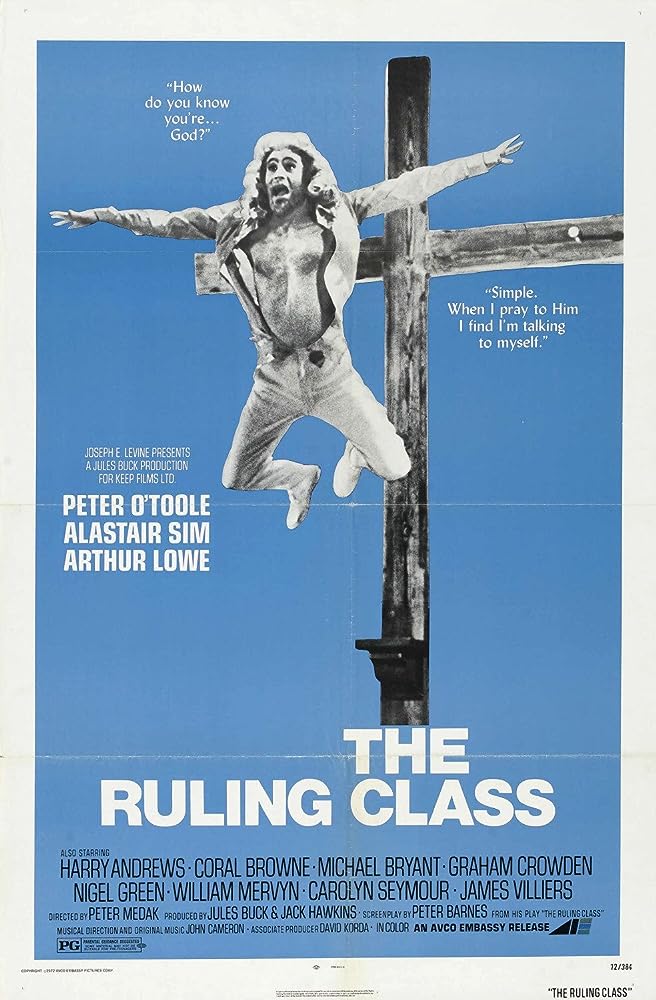