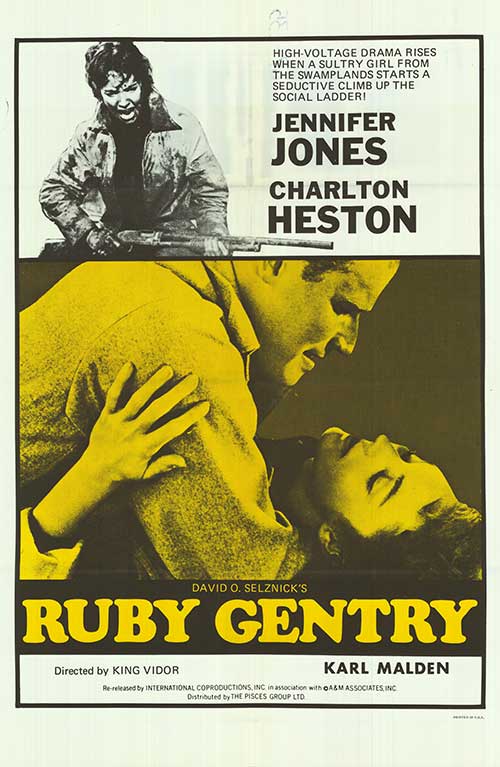 King Vidor (“Duel in the Sun”/”The Big Parade”/”The Crowd”) directs this Southern swampland romantic drama that’s filled with an almost hysterical emotional fervor, but it wasn’t trashy enough to be campy and its respectable reserve it used to sell its lurid tale wasn’t entertaining. It’s shot in black-and-white, and is based on a story by Arthur Fitz-Richard and is written by Silvia Richards. Nevertheless there’s much to take pleasure in this flawed class struggle melodrama that was at least steamy for its time.

The film is narrated by the new Yankee doctor in town, Dr. Saul Manfred (Bernard Phillips), who is treating the invalid Letitia Gentry (Josephine Hutchinson), the wife of the elderly landowner Jim Gentry (Karl Malden), the richest man in town. Ruby (Jennifer Jones, who was a thirtysomething at the time is playing a teenager) is a sexy tight jean wearing teenager country gal from the snobbish small-town of Braddock, North Carolina, who was born on the wrong side of the tracks and is therefore left out of the high society’s social whirl. Her family is employed as servants by the Gentrys and live on the estate. Ruby has fallen hard for the judge’s hunky son, Boake Tackman (Charlton Heston), a member of the local blueblood elites who have fallen on hard times money-wise. He’s just returned from South America to drain his families swamp to grow crops and aims to make a fortune, and tries to rekindle his romance with Ruby on a hunting venture. But she teases him and refuses to go to bed with him unless he’s more serious. He instead marries a nice wealthy society gal from his own class named Tracy (Phyllis Avery). When Jim’s wife suddenly dies, he impulsively asks Ruby to marry him. Though she still has an animal-like attraction for Boake, on the rebound she secretly marries Jim in NYC and returns to her hometown bent on getting revenge on her lover and the hypocritical town. How she does it and what price she pays for her fury, is what this soap opera tale is all about.