Early one-reeler Charles Chaplinslapstick Mack Sennett Keystone comedy that he wrote, directed and starred in. It’s mildly interesting, making some funny comments on the institution of marriage, but some years away from his more evolved “Tramp” character.

In this comedy Chaplin and Arbuckle live in the same hotel, belong to the same lodge, and are both drunks married to domineering wives. One night they return separately and are both plastered and both needing help from the bellboy to make it to their apartment. First Chaplin gets kicked around by his wife Phyllis Allen and then Fatty’s wife Minta Durfee kicks him around. Then the wives get angry at each other. The boys suddenly team up and steal money from the purses of their wives and make their way to Smith’s Cafe, where their angry wives come after them and a brawl breaks out in the club but the boys flee the club mob chasing them and end up falling asleep in a capsizing rowboat they stole in the park. 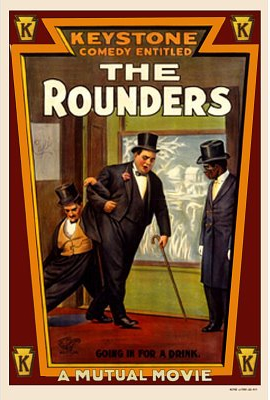