“An intelligent and faithful adaptation of Ira Levin’s Satanists thriller.”

It’s an intelligent and faithful adaptation of Ira Levin’s Satanists thriller novel. The modern witches in New York are located in the Bramford, on Central Park West (filmed in Manhattan’s famous Dakota apartment building, where noted resident John Lennon was assassinated), an old apartment building with a troubled history over strange events. It’s writer-director Roman Polanski’s (“Repulsion”/”Chinatown”) first American film. He keeps the horror part from being gory or even supernatural, but grounds it in the reality tale of a wife in distress over her treacherous hubby, the possibility of her fallen into the hands of a witches’ coven and her loss of identity whereby she goes from a robust happily-married housewife to one physically weak and mentally falling apart after her pregnancy. The tension is convincing, effectively mixing in urban alienation, the black arts, sexual politics and the human interest concerns of an anxious first-time pregnant mother. The performance by Mia Farrow as the distraught heroine Rosemary Woodhouse is gripping and frighteningly conveys her nightmare scenario. The film was wisely presented by Polanski up until the conclusion, where everything becomes clear, with enough ambiguity for one to either think that lapsed Catholic Rosemary has either been impregnated by the Devil or has fabricated the whole thing because of her hysteria and is suffering from hallucinations. It might very well be the best horror film ever.

An out-of-town happily married young couple, Guy (John Cassavetes) and Rosemary Woodhouse, move into the Bramford and take the apartment of an elderly woman who dies and left the following message scrawled on her desktop “I can no longer associate myself.” Guy is a struggling, self-absorbed actor, while Rosemary yearns to raise a family of three. They soon become friendly with their colorful elderly next-door neighbors, Roman and Minnie Castevet (Sidney Blackmer and Ruth Gordon), even though Rosemary is suspicious of them as being weirdos and finds it strange to hear chanting sounds coming from their apartment. Rosemary grows to resent hubby spending so much time with them and feels a little bit guilty why she resents them so much since they shower her with gifts (such as a lucky charm) and exotic food concoctions made from the herbs in Minnie’s home garden. In truth, the intrusive Minnie, not known to Rosemary, belongs with her smoothy hubby to a witches’ coven. They promise Guy that they will jump start his career if he agrees to let his wife give birth to the Devil’s son and let the cult group raise him so they can use the baby for their Satanic rituals. The first big scare occurs when Terry, a drug addict rehabilitated by the generosity of the Castevets, who allow her to free-load in their apartment and treated her as a grandchild, one night jumps out the window. Rosemary’s old friend Hutch (Maurice Evans), who told her about an infamous witch named Adrian Marcato, a Bramford resident murdered early in the century, tries to warn her of the danger she’s in and is put into a coma. Soon Guy gets a big break when the actor who beat him out for a part goes blind and he now gets the juicy part on Broadway. Then Rosemary has a nightmarish dream of being raped by a Beast. After being convinced by hubby to switch obstetricians from the nobody Dr. Hill (Charles Grodin) to celebrity doctor Dr. Abraham Sapirstein (Ralph Bellamy), who prescribes strange herbal remedies prepared by Minnie, Rosemary finds herself filled with pain and the sympathetic small-town gal gets into a battle with hubby and her new cult friends over her treatment. It concludes in a creepy manner with Rosemary’s maternal instincts to raise her baby overcoming her horror that she gave birth to the devil’s flesh-and-blood baby. 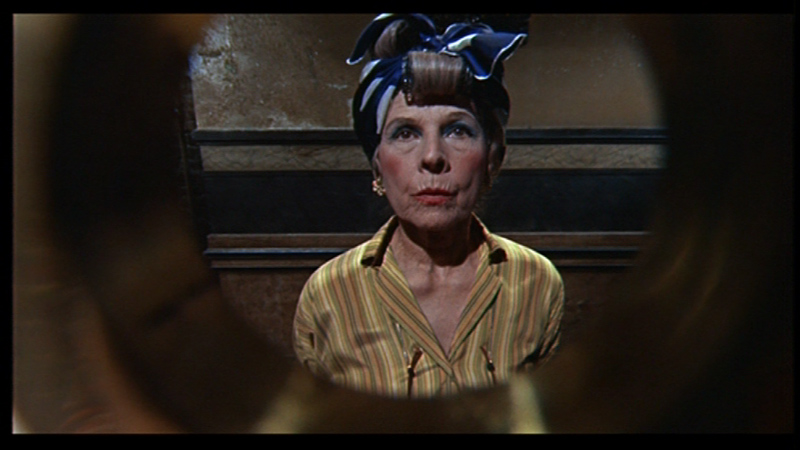