A slow-going thriller similar in plot to Hitchcock’s I Confess. It’s based on the novel by ex-priest William X. Kienzle. It’s scripted by Elmore Leonard and the director Fred Walton(“April Fool’s Day“/”When A Stranger Calls Back”/”Hadley’s Rebellion“).

Donald Sutherland plays a liberal informal parish priest who discovers in confession the killer of other priests in Detroit. The killer leaves his calling-card, a black rosary wrapped in the hand of each corpse. However the priest is stuck, as Catholic law forbids him to reveal what he learns at confession. Thereby Sutherland plays sleuth, and shows up the inept clueless police, led in their floundering investigation by Lt. Walt Koznicki (Josef Sommer). The only help Sutherland gets is from ditzy reporter Belinda Bauer. Charles Durning plays the conservative father superior.

The thriller never excites. Its climax has no big moment. 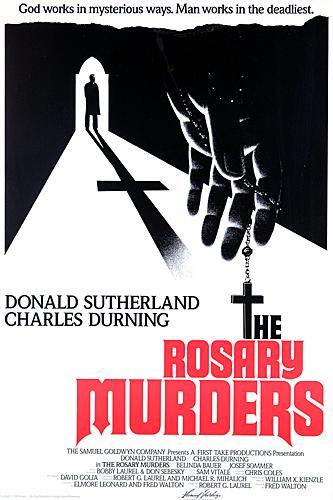