“Sometimes outstanding but is a not always satisfying screen adaptation of Thomas Hardy’s last novel.“

Jude is sometimes outstanding but is a not always satisfying screen adaptation of Thomas Hardy’s last novel which takes place in 19th century England and shocked the public of Victorian England at the time of its release in 1895 and caused such a severe reaction he put down his pen forever. Though for the most part the movie is faithful to the novel, it is not as smooth and goes astray through weak interpretations of the characters by the main principals–the Jude character is not appealing enough and the Sue character is too obstinate for the viewer to find her cause sympathetic. It is directed by Michael Winterbottom and scripted by Hossein Amini, who lost something of the dramatic key moments by just briefly glancing over them in the film’s rush to cram everything from the thick novel into the two hour film. Also, the lead actors lacking chemistry together failed to convince that their love for each other was so great. Somehow the tragic elements of this most cruelest of novels never fully got transferred to film, so when the brunt of the tragic outcome hits the unfortunate prideful Jude with its full blast it is not as moving as it should have been.

It’s the story of country boy Jude Fawley (Eccleston), the Wessex born bookish stonemason of a low birth. He is ambitious to receive a university education needed to rise above his station in life, but who is thwarted of his ambitions when tricked into marrying the pig farmer’s daughter Arabella (Griffiths). She lied about her pregnancy and abandoned him when things soured, so he now feels unburdened to travel to the fictional university town of Christminster to pursue his dream. Here he falls in love with his beautiful worldly and free-spirited and unconventional cousin Sue Bridehead (Winslet).

But when she digests Jude’s marriage, Sue in a fit of anger mistakenly weds an older schoolteacher Phillotson (Liam Cunningham) who first inspired Jude’s dreams about the university and is now at the university town. Eventually, the two cousins flaunt convention and live together. Sue’s modern ideas allow her to feel free to live with Jude and bear him children outside of marriage, while she is still living with her husband. To support Sue and their children, Jude gives up his university aspirations to work again as a stonemason.

Too much of what the novel had going for it got lost for the film to be anything more than a responsive attempt to get at Hardy. It misfires in making the Winslet character more a product of modern invention rather than catching the subtle emotional twists between the lovers to show that their relationship was doomed because of bitter hopelessness. 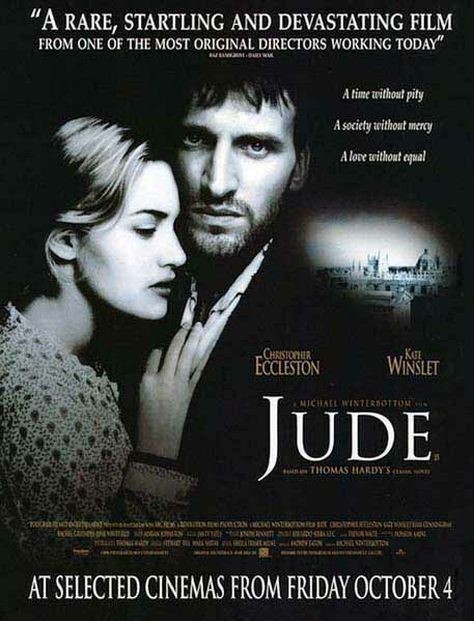