The astonishing, playful and idiosyncratic cult film documentary by LA filmmaker Rodney Ascher investigates the hidden meanings in Stanley Kubrick’s 1980 horror film “The Shining.”It cleverly fleshes outKubrick’s arcane film of Stephen King’s second novel. King has stated in interviews that the book was meant as a metaphor for his own struggle with alcoholism, and took exception to the way Kubrick filmed it by chucking out all his plot points and making it less recognizable as his horror film. Under Kubrick the film turns out to be much more than a horror film, but a multi-layered film about the past–its voices, ghosts and the nightmare of history. The film, in a nine part “inquiry,” builds a case based on the difficult to see background shot display of cans of Calumet baking soda in the kitchen storage that points the way to it being about the genocide of Native Americans, the broken peace treaties with the Indians and, in an even more subtle sense, there’s other details offered to prove it’s about the Holocaust. The latter idea can be attested to by the German typewriter with the eagle the aspiring writer Jack Nicholson character uses and that the number 42 pops up a number of times–that is the year the final solution was implemented.

It uncovers through its fastidious study of the movie’s details things about it that are easy to miss when looking at it only as a straight horror pic of a wife and son threatened by a lunatic husband while spending the off-season sitting watch on an abandoned ritzy hotel located atop of a Colorado mountain, one that was built in 1907 atop a sacred Indian burial ground.

Through interviews with journalist Bill Blakemore, history professorGeoffrey Cocks,playwright Juli Kearns, musician/bloggerJohn Fell Ryan and author Jay Weidner the viewer gets widening opinions about the film’s deeper meanings and that it sends a message to humanity that if we continue to do such horrible things as the Indian genocide and the Holocaust without ever realizing what we are doing, history will repeat itself. Kubrick uses the innocent kid, who has the visionary qualities to see into the past, to be our guide to retrace our steps and get out of the maze we are stuck in to start over fresh. The kid and his mom are looked at as symbols for all victims of the killing monster, in this case their delusional psychopathic father–played by Jack Nicholson.

We are further told not to be afraid of looking back at the bleak past because it only exists in our mind but doesn’t really exist.

Room 237 in the movie is a locked hotel room, where we are forbidden to enter because it supposedly holds dark secrets from the past that for those unwilling to change their negative ways will mean their downfall.

There are many other ideas presented, that include calling it an experimental Kubrick film that was so enigmatically made because the genius was bored after making Barry Lyndon and had already scaled the heights of movie-making with one masterpiece after another.There also was much time spent discussing the theory that Kubrick secretly staged the Apollo moon landing using the front screen projection technique of 2001 which, as far as I was concerned, was too speculative a theory to determine if that was proven real or not.

In any case, this deconstructive documentary, fastidiously presented, offers many rich ideas that I hadn’t quite seen in the ways depicted here, even after seeing the film at least 5 times. It did convince me to see the film again and it did change my mind on how I would rate the film higher if I reviewed it again. For that, I am most grateful. The Shining is a timeless film that will continue to be evaluated and mined for further clues about where the director was leading us. 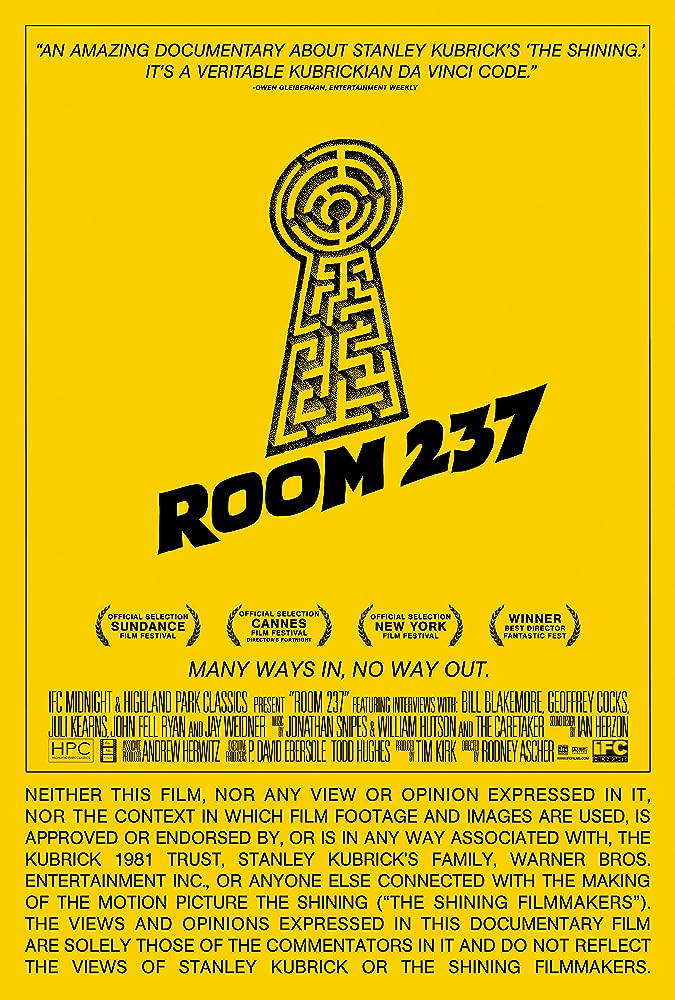