Old-fashioned classic romantic film that doesn’t hold-up to modern standards, but the b/w film masterfully manages to let us know in a meaningful way the timeless message of how cruelly the world treats its true artists. Star, producer, co-writer and director Guru Dutt (“Baaz”/”Jaal”/”Kaagaz Ke Phool“) laces the tragic love story of a struggling poet with at least ten lively S.D. Burmansongs (giving us a preview of the soon to be Bollywood). The hammy performance by Dutt as the impoverished college grad poet, Vijay, may shamelessly pull on the heart strings and his story may be grounded in formulaic melodrama; nevertheless, the dark story of a poet trying to survive in India after the British colonialists left is affecting. This is perhaps Dutt’s best film. Some critics call it a masterpiece.

Dutt was a major auteur of India’s golden age. This bleak film tells of a homeless poet, loved by his widowed mom (Leela Mishra) but taunted as a failure by his two doltish adult brothers. Vijay is befriended only by streetwalker Gulabo (Waheeda Rehman), who got hold of his poems when his uncouth brother (Mehmood) sold them to a grocer for wastepaper and Gulabo bought it. She memorized the poems and turned them into songs. The streetwalker and poet meet after he hears her beautifully singing his poems in the street.

There’s a glimmer of hope for Vijay, after his poems are rejected by traditionalists because they are about hunger and not romance, when he meets again at his college reunion his former girlfriend Meena (Mala Sinha) and her publisher hubby Mr. Ghosh (Waheeda Rehman). He’s hired by the publisher. But soon out of jealousy, he’s fired. Things turn desperate as Vijay contemplates suicide, and tells this to the prostitute. When it’s thought he’s dead because he vanishes, his death is announced in the newspapers. Thereby his poems get published and posthumously he’s recognized as a great poet.

The story is set in Calcutta’s post-Partition India, and its satisfying spirited study of a determined man craving for art, love and humanity is pleasing to our intellectual sensibilities and shows off Dutt as a visionary filmmaker. 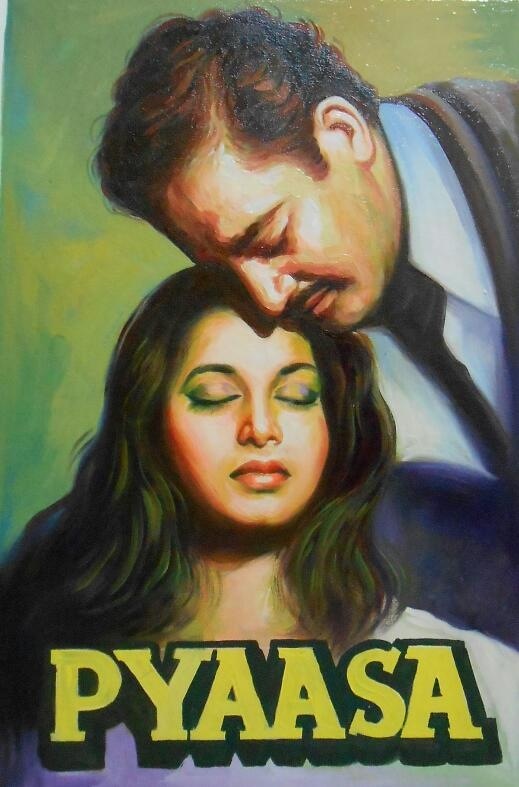