The sluggish romantic melodrama works best as a travelogue of Rome. Director and writer Delmer Daves (“Parrish”/”A Summer Place”/”Spencer’s Mountain“) gives it a corny pedestrian feel, and the characters are all wooden stereotypes. If you dig sappy romancers, this is the ‘mother load.’ It’s adapted from the 1932 novel Lovers Must Learn by Irving Fineman.

Prudence Bell (Suzanne Pleshette, her second movie and first starring role) is a 21-year-old virgin assistant librarian at a stuffy women’s college in Connecticut, who quits when challenged by administrators for lending to a female student her own copy of a banned book on love. She decides to go to Italy to discover for herself the meaning of love. En route by ship, Prudence meets the socially awkward Etruscan scholar from America Albert Stillwell (Hampton Fancher) and a Roman playboy charmer Roberto Orlandi (Rossano Brazzi). In Rome, the sophisticated Italian, after failing at his attempt to become Prudence’s lover, hooks up his two companion voyagers to stay in the boarding house of the Contessa (Iphigenie Castiglioni). The Contessa hooks Prudence up with a clerk job at an American book store. Also staying in the boarding house is hunky American architectural student Don Porter (Troy Donahue). He’s in a twit because his wealthy American painter girlfriend Lyda (Angie Dickinson) dumps him to go paint in Switzerland. Predictably Don and Prudence begin a romance.

Pleshette and Donahue fell in love on the set and were married after the film wrapped. Warners paid for the big bash. I believe the marriage lasted nine months. 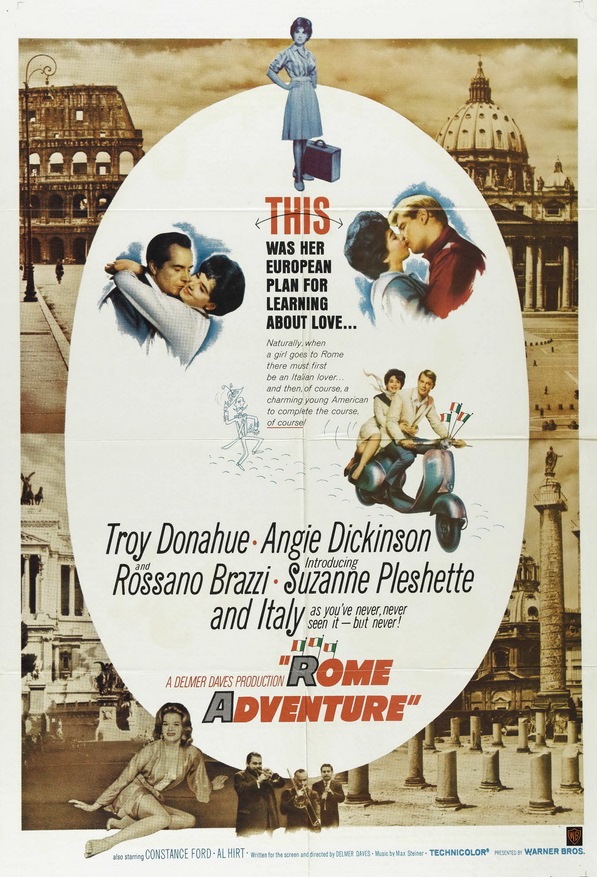