ROGUE ONE: A STAR WARS STORY

“Even if it’s not great, it is a quality sci-fi film that won’t disappoint its fan base.“

Serves as an intro to the 1977 original film and therefore stands alone in the series, as it tells of the events that first unfolded. Gareth Edwards (“Monsters“/”Godzilla”) directs with a penchant for shooting almost non-stop battle scenes. He keeps the franchise looking solid again after it recovered from a series of failures the last time out in 2015 with a welcomed J. J. Abrams episode called “The Force Awakens.” Writers Chris Weitz and Tony Gilroy keep the prequel Star Wars friendly, as they ground it with the Star Wars usual mix of humans and droids, loopy juvenile humor, plenty of nostalgia moments, colorful primitive landscapes and a spirited fight between the forces of good and evil. The filmmaker just can’t add wit and inspiration to his list of positives.

Michael Giacchino takes the place of John Williams in handling the score, and doesn’t miss a beat.It’s set in a faraway galaxy, in the distant past. In the opening scene, the Galactic Empire’s brilliant scientist Galen (Mads Mikkelsen), once part of the Rebellion, has run away from his job with the Empire only to be kidnapped on his farm by the sadistic mass murderer, the Imperial special weapons director, Krennic (Ben Mendelsohn), and his Stormtroopers. Under Krennic, Galan is forced to again supervise the completion of the Death Star, the weapon he designed, the ultimate weapon of destruction to keep the planets in line. After Galen’s wife (Valene Kane) is killed by the intruders, his abandoned young daughter Jyn Erso (Felicity Jones) escapes and is protected and mentored by the radical extremist rebel Saw Gerrera (Forest Whitaker), who eventually also abandons her because she has no grit to fight the nasty Empire. But she gets a wake-up call after seeing how evil the Empire is and joins the fight against it. The feisty young woman hooks up with a band of brave rebels headed by the rebel spy Cassian Andor (Diego Luna). Their daring mission is to steal the plans for the Death Star and take down the villainous Krennic. The group locates her father and redeem him as a true hero and not a betrayer of freedom as many of the demoralized rebels thought. They also relay this to their rebel command center during their raid in order to get their help. The band of freedom fighters will include a blind Jedi monk (Donnie Yen), a grunting machine-gunner accomplice (Riz Ahmed), and K-2SO (voiced by Alan Tudyk). He’s a tall black Imperial droid who has been reprogrammed by the rebels and his banter is filled with one-liners. The rebel band have stolen from their headquarters a spaceship and call it Rogue One, as they carry out their daring unauthorized mission on Empire turf. Rogue One dragged at times. But even if it’s not great, it is a quality sci-fi film that won’t disappoint its fan base 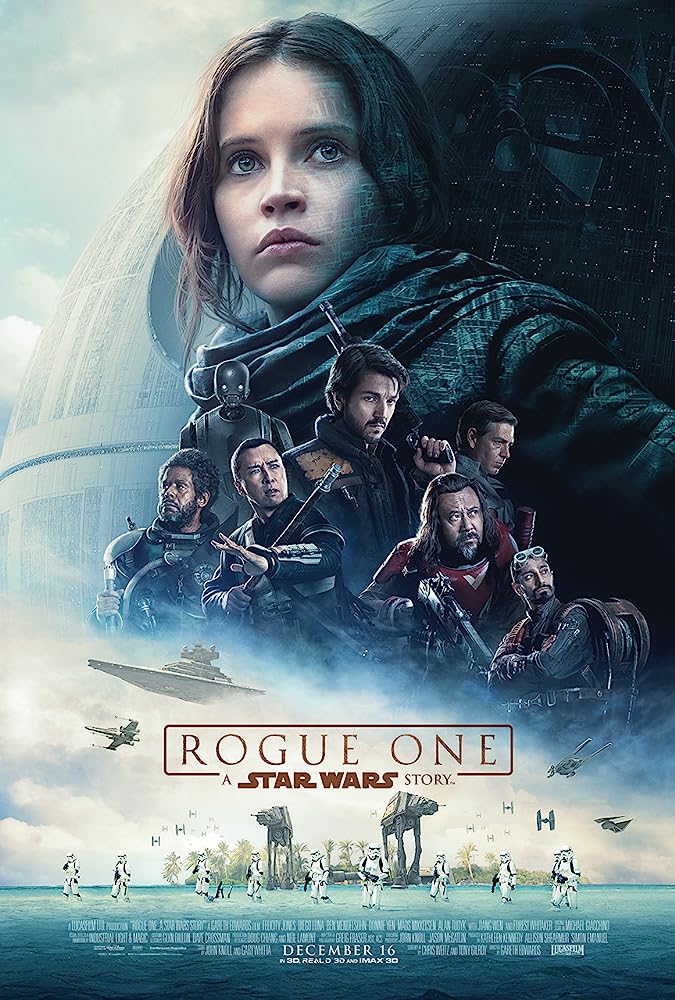