“Rails against corporate greed and asks what happened to the American Dream and its promise of middle-class prosperity.”

First-time filmmaker Michael Moore (“Sicko”/”Bowling for Columbine“) returns to his hometown of Flint, Michigan, from an investigative journalist job in San Francisco in response to Roger Smith, chairman of GM, closing down 11 plants in Flint and firing 30,000 workers, in a city of 150,000. Flint was the place where the auto giant was founded, and where his dad worked on the assembly line. The scathing and quirky blue collar social conscience documentary by the activist is shot with heartfelt passion as it rails against corporate greed and asks what happened to the American Dream and its promise of middle-class prosperity. The grimness of the subject matter is eased only by the in-your-face gadfly antics of Moore and the film’s black comedy, that tamps down how depressing were the layoffs. Interviews with fired workers and visuals of abandoned rundown homes, contrasts with a lavish party given by the clueless and uncaring rich of the town. Visiting celebrities such as inspirational speaker Robert Schuller, “Miss Michigan,”Anita Bryant, Bobby Vinton and Pat Boone boost morale by telling the unfortunates of Flint to keep the faith.

The gist of the populist film follows the intrusive baseball hat wearing Moore and his crew in their failed attempt to interview the cold-hearted chairman on camera over a period of three years, whether in his workplace in Detroit or luxury home in Grosse Pointe.Moore uses archival footage to show how the auto union started in Flint in 1936 and compares Flint in its glory days during the 1950s to its current ruin, where every movie theater in town is closed, most stores on Main Street are boarded up and the busiest worker in town is a Deputy Sheriff serving eviction notices on families unable to pay their rent.

It effectively serves as an irreverent response to the Reagan era, with the future president seen on the campaign trail advising the unemployed to go to Texas to get jobs. 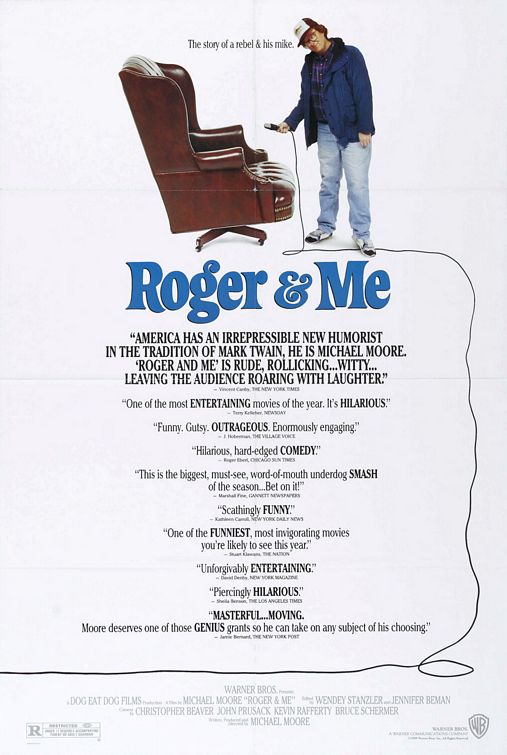 OLD MAN AND THE SEA, THE

WHO’S THAT KNOCKING ON MY DOOR