“The idealistic Peter Lennon, a Paris-based Guardian journalist, films a deeply affectionate look at his homeland on his return home.“

Reviewed by Dennis SchwartzThe idealistic Peter Lennon, a Paris-based Guardian journalist, films a deeply affectionate look at his homeland on his return home, as he laments at the failure of Irish socialism, the remaining vestiges of an outmoded tradition,the bad economy, censorship, reactionary politics and the stunting conservatism of the powerful church that runs the educational system and keeps the students ignorant of what’s going on in the world by avoiding subjects that it doesn’t agree with. Lennon provides the stirring voice-over for, perhaps, the only documentary to depict the real Ireland of the 1960s, and asks: What do you do with your revolution once you’ve got it?”

The lively Chris Marker-like doc captures the changing social landscape of Dublin, as it tells how after 700 years under rule by Great Britain the small country now has to deal with being a republic and with the political manipulations by the regressive Catholic Church–who find politicos who ally with them. After a brief history lesson about the failed 1916 Irish uprising against their occupiers, that was led by poets and socialists, and the unsatisfactory results from the treaty of the 1922 Civil War, that left northern Ireland still under British rule, Lennon tells of Ireland’s neutrality during WW I I, the depression in the 1950s, and then takes us on a tour of the city while interviewing politicians, conservative older types, outspoken writers (like Sean O’Faoláin), the new Irish citizen John Huston (filmmaker) while he’s making a foreign picture (Sinful Davey), and school kids. Lennon further tells us about the changing times of the 1960s, as wewitness the lively pub scene–with the folk group the Dubliners providing some rousing songs; a horse show for the Protestant landed gentry and the growing bourgeois Catholic crowd; an approved tennis club dance where guys can meet gals in an orderly fashion, an unsuccessful attempt to get the populace to speak Gaelic, a questionable policy of tax breaks for foreign investment in industry, and a look at a modern priest, Father Michael Cleary, trying to connect with jokes and songs with a younger audience.

The magnificent black-and-white photography is by Raoul Coutard, French New Wave director Jean-Luc Godard’s regular one. Despite being banned upon its release in Ireland, the documentary was feted at Cannes. It was the last film shown at the truncated 1968 Cannes Film Festival (a protest caused by filmmakers (like Godard & Truffaut) in sympathy with the student and worker protests of May ’68 in Paris) and, thereby, this film has remained nearly forgotten until it was restored by the Irish Film Board in 2004.

It ends on a hopeful note, as Lennon observes the young are changing the country’s attitudes and that change is inevitable as the more daring youths strive to gain more freedoms. 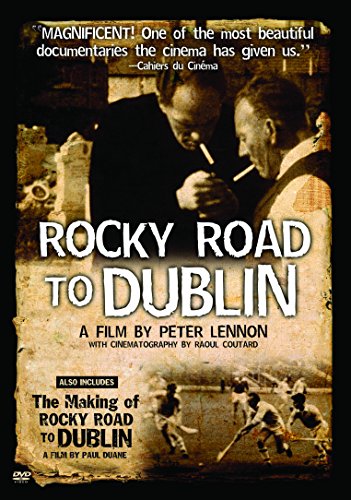