ROCK AROUND THE CLOCK

“If you can tune out the corny story, the music is a good trip down memory lane.”

Crazy man! A cheapie exploitation film from the B-film team of producer Sam Katzman and Fred Sears (“Chicago Syndicate”/”Fury at Gunsight Pass”/”Miami Expose”) that calls out squares, but with the passing of time it seems as if the worm has turned and this groundbreaking rock film has been surpassed by more innovative rockers such as Elvis and Little Richard.

It’s a nostalgia film that serves as a time capsule for the onset of rock ‘n’ roll in America. The music swings, but the clunky formulaic story stinks to high heaven. The songs include Bill Haley and the Comets doing the title song (his signature song is considered the anthem for rock ‘n’ roll in the fifties), “See You Later Alligator,” “Rudy’s Rock,” and “Rock-A-Beatin’ Boogie;” other songs come from legendary rock groups such as The Platters performing “The Great Pretender” and “Only You;” Freddy Bell and His Bellboys performing “Giddyup Dingdong” and “I’m Gonna Teach You How to Rock;” and Tony Martinez and his band performing “Mambo Capri,” “Sad and Lonely,” and “Codfish and Potatoes.”

The slight story has big band manager Steve Hollis (Johnny Johnston) and his band playing pal Corny LaSalle (Henry Slate) quit their outdated unpopular big dance band, and while driving to NYC stopover in the small-town of Strawberry Springs. There they witness rock ‘n’ roll at a Saturday night teen dance and sign up the band, Bill Haley and the Comets and the two flashy dancers—brother Jimmy Johns (Earl Barton) and his sister Lisa Johns (Lisa Gaye, sister of Debra Paget).

As the band goes from obscurity to fame they encounter the devious Corinne Talbot (Alix Talton), the owner of the largest talent agency in show business, who is jealous that Lisa and Steve are attracted to each other since she has designs on Steve and tries her best to dump Lisa from the act, but to no avail. Things end blissfully for the rockers when popular rock-and-roll disc jockey Alan Freed (himself) arranges for them to appear on his Los Angeles national television program.

If you can tune out the corny story, the music is a good trip down memory lane. In London, the film caused near riots as teens danced in the aisles. 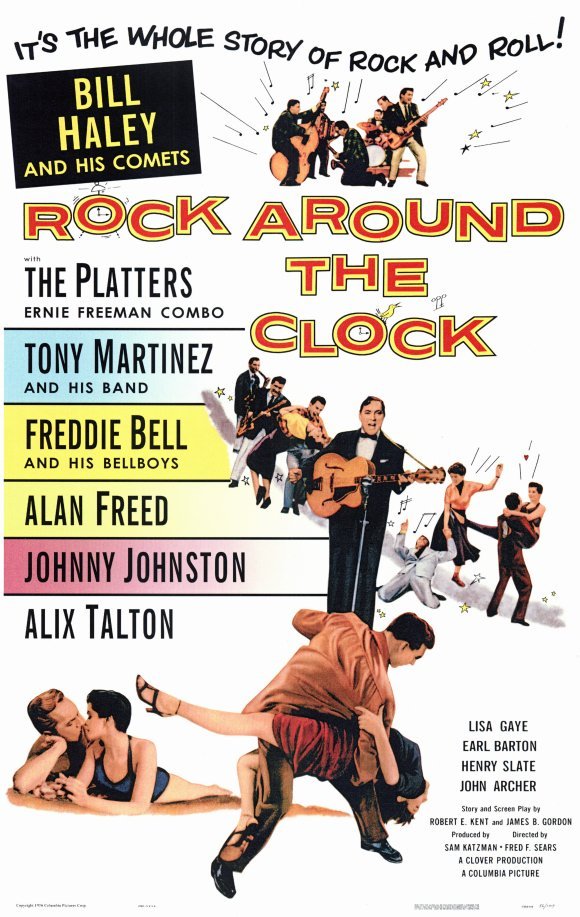