ROBINSON CRUSOE (aka: The Adventures of Robinson Crusoe)

“The film in its simple telling, without sentimentality, evokes a feeling of awe.”

While Spanish director Luis Buñuel (“Viridiana”/”The Exterminating Angel”) was in exile in Mexico he made his only American-financed film, first color film and only one in English. It’s taken from Daniel Defoe’s classic novel and written by Buñuel and Hugo Butler. It’s Buñuel’s straightforward version of the story of one man’s isolation and survival for twenty-eight odd years and his spiritual development. Buñuel is most faithful to the novel and only offers a few surrealist scenes he’s known for, such as dream sequences of disobeying his haughty father (who bathes a pig while admonishing his son with his I-told-you-so lecture) and over religion (questioning his faith, the church and the meaning of forgiveness). It’s told by Robinson Crusoe (Daniel O’Herlihy) in narration, as he in a matter-of-fact way describes his daily ordeal. It offers a sympathetic look at the guilt-ridden hero wrestling with his inner demons, and leaves us with an abundance of warmth for his humanity. Only Crusoe appears on the screen until well into the film, when the savage Friday (Jaime Fernandez, Mexican actor) appears and is made his docile servant. The film in its simple telling, without sentimentality, evokes a feeling of awe.

In 1659 the bourgeois English gentleman mariner Robinson Crusoe while on a sea journey to buy African slaves finds himself alone on a deserted tropical island off the coast of South America after a shipwreck. Faced with hostile surroundings, Crusoe for the first time in his life must gather food and find shelter alone without servants. The aristocrat now must become a worker using his hands to survive. He has only the ship’s dog Rex and the cat Sam with him, as he battles loneliness and tries to keep sane. As he loses faith, he becomes his own island nature God when he questions his rigid upbringing and faces hallucinations over sexual frustration. Upon the arrival of Friday, Crusoe must deal with his own colonialist inner workings emerging again as he bonds in a relationship with the dark skinned native. That he does so, is about as optimistic as Buñuel gets over mankind’s ability to change and find a way to live together in peace. Crusoe confesses to being happier with a companion than alone (Friday is seen ambivalently as both a friend and an inferior). Through Crusoe’s eyes the viewer is implored to question society hierarchies, civilization, religion and morality that’s not tested by experience. 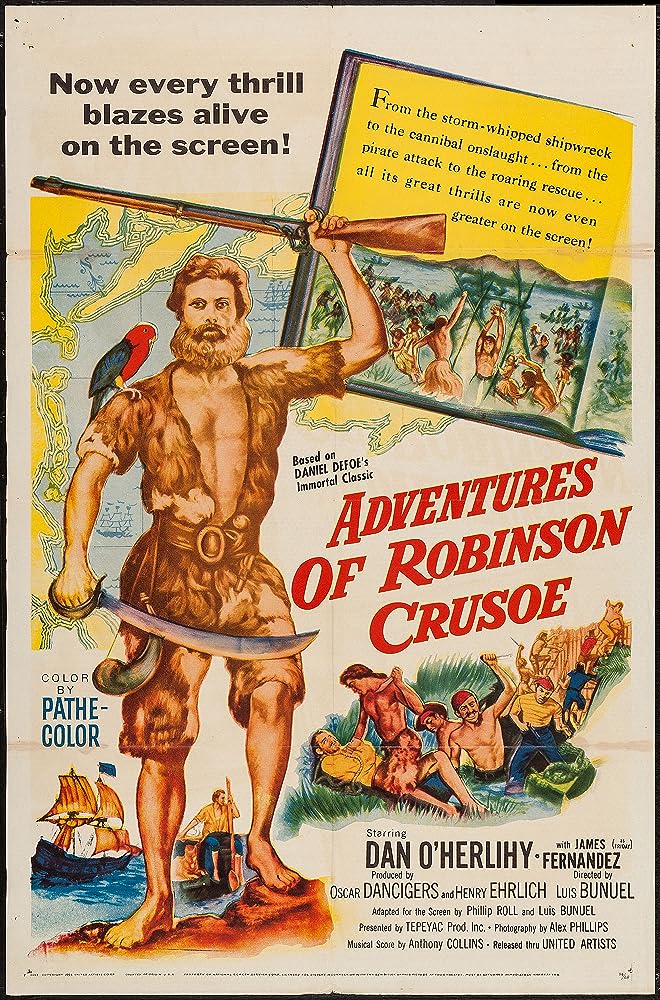