“It’s one of those misfires that’s so ridiculous that some might find it amusingthat it features an orphanage that refuses to allow for adoptions.”

Co-directors Sam Newfield (“The Terror of Tiny Town”) and Mack V. Wright (“Haunted Gold”) shoot a Three Mesquiteer serial Western that’s even of poor quality for this lame series. Oliver Drake & Jack Natteford base the screenplay on their story. It’s one of those misfires that’s so ridiculous that some might find it amusing that it features an orphanage that refuses to allow for adoptions.

In the town of Buena Ventura the crooked general manager of the Cattlemen’s Protective Association, Mr. Hackett (Hooper Atchley), has his goons, posing as range police officers, rustling cattle and causing the association to go bankrupt by paying out the massive claims for the ranchers’ losses. Hackett’s sinister aim is take over the association and force the ranchers out. The evil Hackett forces the closing of the orphanage in anticipation of taking over the property for himself, something the founder of the estate, the late rancher Sam Clarke, vowed would never happen. Doris Moore (Christine Maple, former model), who runs the orphanage, sneers at the baddie. To the rescue come the appointed trustees of the Clarke estate, The Three Mesquiteers-Tucson Smith (Ray “Crash” Corrigan), Stony Brooke (Robert Livingston), and Lullaby Joslin (Max Terhune)-and they immediately stop the closing. The trio go after Hackett’s rustlers, led by the swinish Capt. Gardner (George Cheseboro) and assisted by the Canary (Yakima Canutt, the Duke’s favorite stuntman) — someone we’re told is as yellow as his name. Meanwhile the orphans act cute around Miss Doris and nasty around the piggish adults who come to adopt them, refusing to get adopted by those who show-up wanting to use the kids as slave labor.

Meanwhile Stony romances the attractive Doris. At a children’s charity show to raise money for the home, the trio trap the bad guys and after a shoot-out on the trail send the leaders to a possible twenty year jail sentence. The precocious orphan Bobby (Tommy Bupp) wins the heart of Lullaby and gets adopted by him, if you can believe such hokum. The forgettable pic becomes tiresome as the action sequences are diverted for a yawn-inducing bad children’s vaudeville show and an even worse Lullaby ventriloquist act. 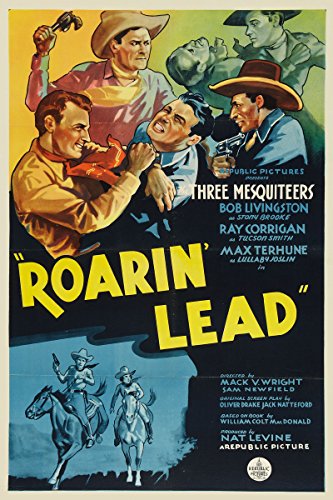