“Forlorn but earnest message film calling for the preservation of wildlife in Africa, that means well but passes for an inane travelogue adventure tale.“

Forlorn but earnest message film calling for the preservation of wildlife in Africa, that means well but passes for an inane travelogue adventure tale. It’s helmed by Noel Marshall, a nutty biological research scientist. He sends for his family to visit him in his African jungle wooden house (filmed at Soledad Canyon, California). The family includes his real wife, the actress Tippi Hedren, and their three children, the two older boys Jerry Marshall, John Marshall and their teenage daughter Melanie (the future actress Melanie Griffith). 150 wild beasts freely live in the house and on the preservation’s grounds,. The beasts include adult panthers, lions, tigers, jaguars, cheetahs, leopards and giant elephants. The wife and kids heartily look afraid when surrounded by the beasts, which I guess passes for acting. Marshall wrote, directed, produced and starred in this $17-million budgeted film (it was financed by Marshall and his wife Tippi). Though it takes place over two days, the film took five years to complete and eleven years to be released. It was plagued by injuries, fire, flood, and disease. It earned the reputation as the most disaster-plagued pic in Hollywood history. For those who love oddball films, this one is odd. The film’s title is taken from the roar of the lions. 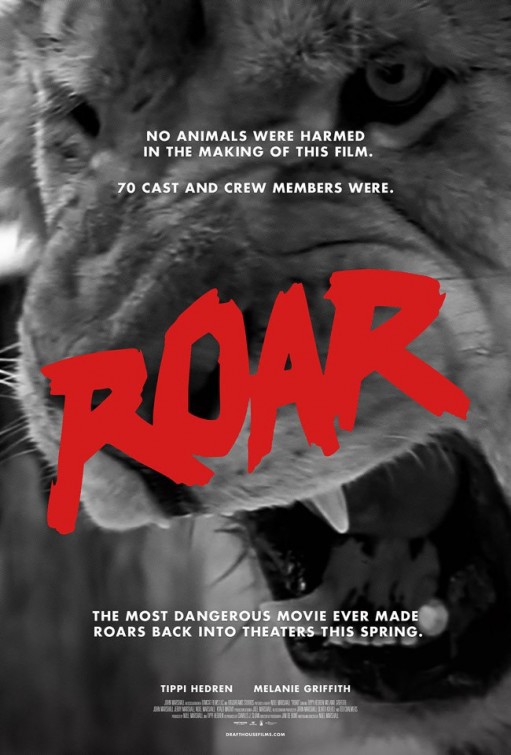