“Milland’s caustic performance, one of his better ones, keeps things at a boil until the bitter end despite the melodrama increasingly becoming more sluggish after a fast start.”

Underrated second-tier filmmaker dating from the silents, Allan Dwan (“Most Dangerous Man Alive”/”Sands of Iwo Jima”/”Slightly Scarlet”), tautly directs in CinemaScope this low-budget B-film crime drama set on the California border with Mexico. The three-character love triangle film noir shows all three troubled characters trying to deal with their varying degrees of flaws. No one is either a saint or a devil, though the Ray Milland character is the really nasty villain who is almost completely a lost cause until he shows one out of character act of kindness—which also happens to lead to his downfall. It’s based on the Harold Jacob Smith story “The Highest Mountain” and written by Smith and renown editor James Leicester.

Expert hunting guide and Korean war vet Ben Cameron (Anthony Quinn) struggles to make a go of ranching on his run-down rural border cattle ranch, where he lives with his San Francisco citified sexy redheaded wife Margaret Fowler (Debra Paget) who can’t stand this farmer trip after finding one too many scorpions in her bedroom but remembers she got parole only because Ben married her and stays because she feels she owes him something. When Meg decides she’s had enough country life and is about to split, her good-for-nothing devious scam artist crime partner who betrayed her on a bunco job and left her to rot in prison, Nardo Denning (Ray Milland), suddenly shows up and is anxious to hire Ben as a hunting guide for his trip into Mexico. Even though Nardo double-crossed Meg before, she still loves the suave bunco artist heel and welcomes him back into her life. When the former lovers are in town together, it’s revealed that Nardo has now robbed a bank and has a million dollars in his suitcase. He begs Meg to go with him to Mexico, after telling her no one is looking for him only for the money. Meg agrees if they go back to the ranch to tell the lovesick Ben, feeling she owes her benefactor that much. But on the way they get stopped by a border patrolman (Frank Gerstle) who insists on looking in the trunk. Nardo panics and runs the cop over, which Ben learns about because he went into town looking for his runaway wife while the patrolman was brought in and heard the cop before he died identify his killer as the one driving the sports car and his accomplice being a redhead. Back at the ranch, Ben agrees to accept $10,000 to take the two across the border because he still loves Meg and wants to protect her from going to jail. He also thinks the money will save their marriage, as he schemes to win her back from lover boy.

The film loses a lot of its steam as the trio attempt to cross the treacherous terrain to the border undetected with the police on their tail. It has the untrustworthy Nardo dead set on killing the guide when they reach their destination and the not so angelic Ben has the same idea of killing his rival. Milland’s caustic performance, one of his better ones, keeps things at a boil until the bitter end despite the melodrama increasingly becoming more sluggish after a fast start.

What I couldn’t understand is why Nardo was anxious to go to Mexico and cross a heavily guarded border if he wasn’t being hunted.

The film gained traction as a cult fave because of its nutty love triangle story, that’s fun watching as hottie Paget goes from one man to the other in a way that hardly made sense but was nevertheless enticingly entertaining. 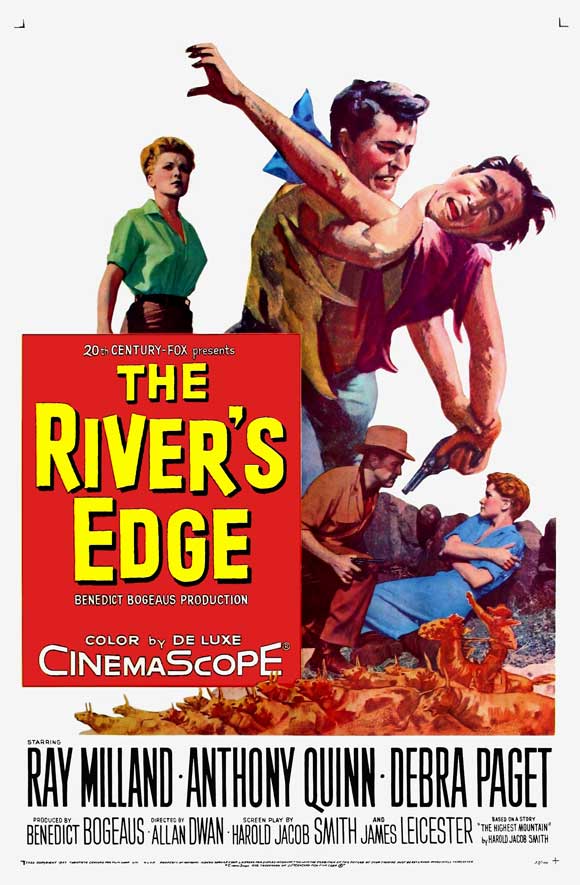