“This relic early talkie is watchable for its historical importance but its melodramatics are awkward.”

Former aviation editor for the New York Herald before turning director, Luther Reed (“New York”/”Sawdust Paradise “/”Dixiana “), turns out this lavishly made B/W (with certain ballroom scenes experimenting with primitive color) gay Latin American musical, with singing Texas Rangers and a lovely singing Mexican heroine named Rita. It’s based on the 1928 hit Broadway show produced by the legendary Florenz Ziegfeld. The play was written by Guy Bolton and Fred Thompson, which the film adheres to and keeps its same ridiculous plotline. It’s a weird hybrid musical and comedy, featuring the slapstick vaudeville routine of Bert Wheeler and Robert Woolsey. It’s noteworthy for being the first major production for the newcomer RKO Radio Studios, and was a big commercial success that helped make the comedians Wheeler and Woolsey the studio’s biggest comedy stars of the early 1930s. This relic early talkie is watchable for its historical importance but its melodramatics are awkward. MGM bought the rights for a 1942 remake that featured Abbott and Costello, and thereby put the original out of public circulation until a recent VHS.

In the Mexican border town of Fremont, Texas, the Texas Rangers post wanted signs in the local saloon for the Mexican bandit known only as Kinkajou (Don Alvarado)–which means Wild Cat. After the bank robber is Texas Ranger, Captain Jim Stewart (John Boles), who goes undercover disguised as a Mexican. Jim suddenly shows up on the Mexican side of the border at the big ranch of the innocent Rita (Bebe Daniels), an Irish-Mexican senorita who speaks with a thick Spanish accent and is the sister of Roberto Ferguson (Don Alvarado ), who just happens to be the mysterious Kinkajou–which she is unaware of.

A shady general, an aristocrat of Russian heritage, Ravinoff (Georges Renavent), is a despotic rancher baron who operates a floating gambling resort on a barge on the Mexican side and pretends to Rita that he’s a pal of her brothers as he woos her. But she rejects his love to be with the gringo Jim. Even after Rita discovers that Jim is a lawman hunting for the Kinkajou, she not only trusts him but saves his life from an ambush. It all leads to the clever Jim setting a trap for the real Kinkajou and getting him arrested on American soil. It ends happily as it turns out that Rita’s brother was not the infamous bandit.

The subplot has Wheeler and Woolsey horse around as a lovesick bridegroom and shady lawyer, as Wheeler might be a bigamist because his fast-talking lawyer Woolsey tells him a quickie Mexican divorce doesn’t count in the States. So the frustrated Wheeler doesn’t get to spend the wedding night with the hot babe he just married (Dorothy Lee) and also gets mistaken by the locals for Kinkajou when he passes around the marked bills from the bank robbery. Also, Wheeler’s first wife (Helen Kaiser) shows up to inform him that she’s inherited $3 million, which clouds the marriage picture further as the shady lawyer chases after the rich babe. 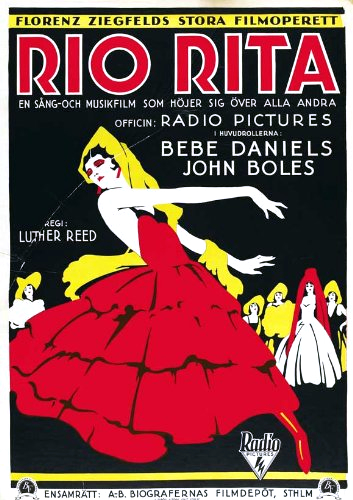