Co-directors Ron Berger and Dan Klores have come up with a winner. It’s an engaging documentary about the 67-year-old six-time world champion Emile Griffith, who came to New York in the 1950s from the Virgin Islands and at fifteen got a job as a delivery boy in the Garment Center. In 1957 he entered the New York Golden Gloves and hooked up with trainer Gil Clancy (who became a legendary figure as a boxing trainer). After winning the open-weight Golden Gloves title the likable kid turned pro in 1958 and began to make his mark in the sport by appearing regularly on the Gillette “Friday Night Fights,” where he fought as a welterweight (somewhere in the 144-147 pound range). His toughest early fight came with Gaspar Ortega, whom he beat on a decision. The gentle but ring savvy fighter (a great puncher noted for his fast hands and feet, who was also a great defensive fighter), was greatly admired for his good attitude and rigorous work ethic while training. Emile became a crowd favorite when he defeated the Cuban fighter Benny “Kid” Paret in Miami in 1960 and thereby won the welterweight crown. In the 1961 rematch held in New York, Paret, who was illiterate and spoke only Spanish, tried to distract Emile at the weigh-in by calling him a “maricon” (faggot). In their rematch, Emile fought a lazy fight and lost in a controversial 15-round split decision. The sensitive Emile was bothered by the remark, because at the time for a sports figure to admit in public he was a homosexual would be committing career suicide. Clancy points out that when equally talented boxers are matched, the winner is usually the one who wants it more. In their third fight, in New York’s legendary old Madison Square Garden, a smiling Paret said the same slur at the weigh-in and Emile had to be restrained from hitting him. Tragedy would beset this bout as Emile in the 12th round unleashed a furious attack and had Paret pinned in a corner where he kept pounding him with countless direct hits. Paret slowly sagged between the ropes and continued to get hit hard before referee Ruby Goldstein intervened. Paret was removed from the ring on a stretcher, and never regained consciousness dying 10 days after the fight at the age of 25. This haunted Emile ever since, even though he went on to a brilliant career. But evidently he never made big money (the most he earned for a fight was a quarter million dollars fighting Italian middleweight champion Nino Benvenuti). Emile ended up working as a prison correction guard.

In the film’s most touching scene, one that can’t be manufactured, Emile meets Paret’s grown kid sometime in the late 1990s for the first time and the two hug and have genuine tears of affection for each other. Emile says “I never meant to hurt him,” while a consoling Benny Paret Jr. says “No hard feelings.” The tragedy has taken a toll on both of the men, but they handle their grief with dignity and civility.

The film is about the violent sport of boxing and the homophobic atmosphere that was present in the early Sixties and how that same violence reappeared for the aging ex-boxer in the early 1990s outside the ring when he was severely beaten in a hate crime incident when coming out of a gay bar drunk and unable to defend himself. The lesson you come away with, in this heartfelt and inspiring tale, is that name calling and homophobia can lead to tragic lessons in life. Apparently we have a long way to go to rid ourselves of our gay bias, but there’s hope that we can do it when we can see that the new generation has taken a course of action that calls for reconciliation. That last scene tells you all that you have to know about Emile Griffith and what he’s about. 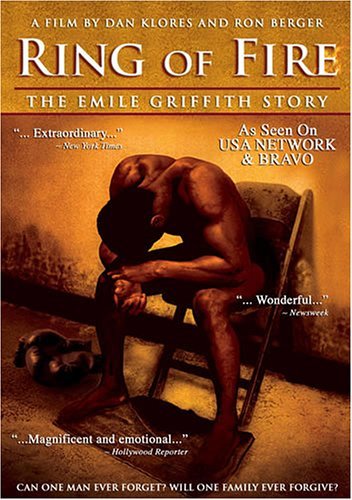