“This is the kind of pulp film where subtlety counted for squat.”

An entertaining but bad campy B-movie thriller (the dialogue was as inane as the loopy narrative) from John Wayne’s Batjac Production Company that takes place under the Big Top in the famed Clyde Beatty Circus. James Edward Grant (“Angel and the Badman”), in only his second and last directing assignment, shows his amateurism but nevertheless manages to keep it lively; co-writer cowboy character actor Paul Fix handed in the almost deranged script along with Philip MacDonald and Grant. Mickey Spillane, who can’t act a lick, appears as an actor and not as a writer; while Clyde Beatty, who also can’t act, but performs dangerous feats as a lion-tamer in his circus. Things couldn’t be dandier than watching theses two as thesps, not that professional actor Pat O’Brien was that much better.

State mental institution inmate Dublin O’Malley (Sean McClory), classified as a homicidal maniac and placed in the Maximum Security Division, who talks with an Irish brogue and fondles a photo of a circus trapeze lady he loves, is denied parole and escapes. Dublin pushes a man in front of a train whom he provided with his identity cards and catches up on the road with the traveling Clyde Beatty Circus, where he worked six years ago as a ringmaster. He keeps his presence a secret except to his former pal, drunken has-been clown Twitchy (Emmett Lynn), whom he blackmails (knowing he’s a wanted criminal) to keep silent and help him sabotage the circus. You see, Clyde Beatty once humiliated the loony by pulling him out to safety from a lion’s cage and this is his way of getting even with such a brave act. After a few serious accidents, including the current ringmaster being killed, Dublin comes out of the shadows and is immediately hired by Beatty as the new ringmaster despite the protests of circus manager Frank Wallace (Pat O’Brien). The circus crowd believes the place is jinxed, but Wallace elicits the help of his pulp crime story writer friend Mickey Spillane to travel with the circus and catch the two-legged jinx–the real culprit. Mickey has New York cop Jack Stang pose as a magazine writer doing a story on the circus as a cover to freely question the three hundred employee suspects.

There’s no element of a whodunit since we know the lunatic is behind all the so-called accidents and we also know his main motivation is that he’s obsessively in love with trapeze artist Valerie St. Dennis (Marian Carr ), who dumped him and is madly in love with her jealous muscular trapeze partner Armand St. Dennis (John Bromfield) and their angelic five-year-old daughter.

Since Dublin is agitating one of the big cats since he joined the circus and the cat growls whenever in his presence, if you want to take a wild guess at how Dublin will get his comeuppance–don’t bet against it having something to do with the big cat. This is the kind of pulp film where subtlety counted for squat.

It’s filmed in a sloppy manner which actually helped it be such a laugher, but many fans of the circus might enjoy it because of its circus footage of real acts, such as the Wallenda family, which serves it well as an historical record of one of the greatest 20th-century American circuses. 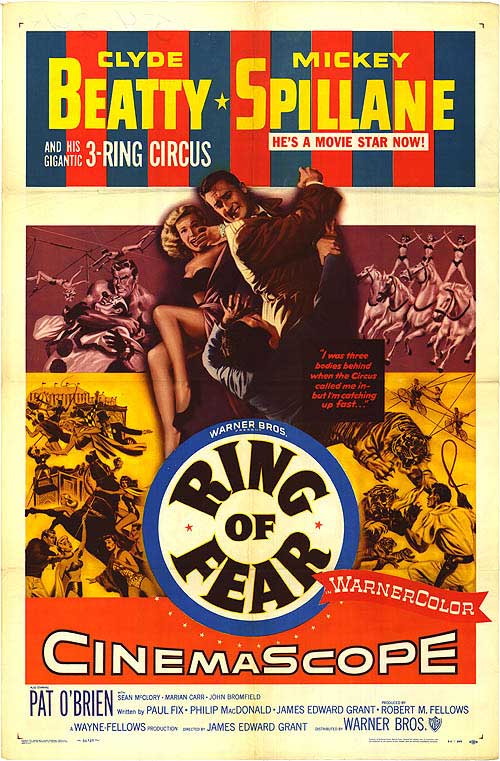