RIM OF THE CANYON

Rancher Gene Autry prepares for a stagecoach raceas part of Frontier Days celebration in the town of Canyon Junction. The sheriff informs Gene that three dangerous criminals escaped and one of them is Jake Fargo (Walter Sande). Twenty years ago Gene’s, now deceased, father captured stagecoach robber and killer Fargo and his other two gang members, but never recovered the $30,000 gold shipment they robbed from the Bonanza mine owner Big Tim Hanlon (Thurston Hall).

While the race takes place, the escaped convicts steal three horses in the deserted town, with one being Gene’s horse Champion. The outlaws then head to a nearby ghost town, once run by mine owner and Bonanza hotel owner Big Tim. That’s the place where Jake hid the loot while on the run.

Meanwhile Gene has a wheel come off the stagecoach, as racer Matt Kimbrough (Alan Hale Jr.) fixes the race so he can go that night to the celebration dance with the waitress Lily (Amelita Ward). She promised the race winner a date to the dance. The deserted Gene walks with a limp three miles to the nearby ghost town to wait there for Matt to pick him up the next day, but unexpectedly finds lonely bespectacled school teacher Ruth Lambert (Nan Leslie) weirdly communicating with the ghost of Big Tim in the abandoned Bonanza hotel. Soon the nearby residing loner prospector, Loco John (Clem Bevans), shows up and tells Gene the escaped felons were at his camp site and had Champion.

Gene becomes romantically interested in Ruth when she takes off her glasses and puts on an evening dress once owned by Big Tim’s actress girlfriend, and suddenly looks ravishing.

Gene learns that Ruth has been coming here the last few Saturdays because she believes she’s communicating with Big Tim’s ghost and he’s offering her positive romantic advice. After the ghost story antics are cleared up through a plot twist, the dangerous escapees return looking for the loot and Gene has to battle with them like his dad did. 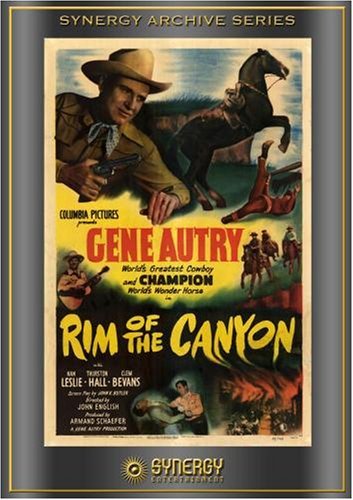