A finely crafted, no-frills, taut, intelligent, NY indie that is directed/written/edited/photographed by Tim McCann (“Desolation Angels“). The film is divided into nine parts as it tries to figure out what might trigger a psychosis. Revolution #9 flirts with spinning a tale about conspiracy paranoia, but the heart of the film is a non-didactic classic case study of schizophrenia.

James Jackson (Michael Risley) is a 27-year-old online freelance writer who suddenly comes down with the mental illness. It becomes an unbearable ordeal for him and his caring fiancée Kim Kelly (Adrienne Shelly), who has to struggle to get him help despite his refusal and she also has to battle with the city bureaucracy and its shoddy mental health service system. The film never flinches from showing the illness as naturally as possible, as it doesn’t get sidetracked with trying to downplay or romanticize it. In the background, NYC seems like a cold place, matching the acutely lonely world experienced by Jackson. The result is a powerfully chilling film that cuts deeply into the heart of its subject matter with a fine ear for listening in on the nightmare its protagonist is going through without displaying an ounce of false sentimentality. This realistic film about mental illness puts last year’s Oscar winner “A Beautiful Mind” to shame, as it refuses to paint a fairy tale picture about the illness and always remains movingly genuine.

Nice guy Jackson, who graduated from college with a 3.9 grade point average, has moved to the city from his estranged family home in Ohio and has been dating lounge bartender Kim Kelly for the past one and a half years. At a gathering of Kim’s family, where her relationship with them is strained, the two announce their engagement and their plans to get married in 6 months. Kim’s dad (Severs) is disappointed with the decision because he only met Jackson briefly twice before and doesn’t trust his daughter’s decision making. At this same time period Jackson starts acting bizarre at work after seeing on his computer a perfume video commercial “Rev9,” which he says has subliminal messages in it directed to reprogram him and its audience. He shortly begins having paranoid delusions at work that the office staff is moving things around his desk. He also charges that Kim’s brother Joe’s 11-year-old computer whiz son, Tommy, is hacking into his computer with unwanted messages. When his paranoia persists, Kim remains sympathetic towards him despite her family warning her to drop the loser. She tries to get him help by paying for a private shrink, Dr. Karlson (Hogan). But her effort fails as he becomes self-destructive and refuses to take the medicine.

Things take a turn for the worst when he gets fired from his job and he mopes around in his dumpy apartment, whose gated windows give it that prison look. But things really escalate out-of-control when he flees from his voluntary two week commitment to a mental hospital and tracks down the director of the perfume ad for an interview, as he amusingly uses the name Ed Murrow to get the home interview with the pretentious Scooter McCrae (Spalding Gray). Scooter is flattered that he’s admired by an online ‘zine and drones on about how he got interested in films by seeing Antonioni’ “Eclipse.” But Jackson alarms the older man when he bluntly asks him, “Can we get to when you became part of the reprogramming?” This sketch was a gem.

Michael Risley gives a convincing performance that is matched by Adrienne Shelly’s restrained and sensitive one, as the ordinary gal becomes heroic as she stands alone to support the ordinary guy she believes in despite his resistance and the resistance she receives from her family and most others she calls on to help. It’s a disturbing film, but it’s grounded in the real world and brings up familiar situations in a bold and unique way. It might be true that many today can benefit from the new medicines to control the illness, but there are still many for whom no treatment seems to work. It’s still a mysterious disease that no one is certain of what triggers it and how to cure it, and this film highlights that problem better than any other film I can remember seeing on this topic. 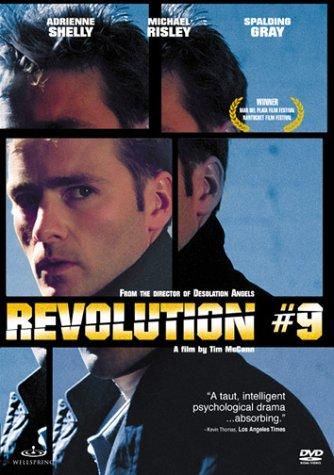