“In this relevant film, we have the rare opportunity of being witnesses to history.”

Netflix offers a divisive documentary, but one that’s riveting. I doubt if it will change any minds. It can be viewed on TV starting on August third. The filmmakers have unprecedented access to ICE (Immigration and Customs Enforcement) operations during the Trump administration (filmed for nearly the first three years of the Trump presidency). It shows rich portraits of both the immigrants and the agents doing their dirty job with a camera always on them. Co-directors, the Israeli Shaul Schwarz and Christina Clusiau (both co-directed “Trophy”/”Aida’s Secrets”), film this six-part docuseries, each segment being one-hour, as it takes a deep look at US immigration enforcement following Trump’s promise to crack down on all immigrants.

My review covers Chapter 1-“Installing Fear.” This segment shows how ICE carries out the president’s enforcement policies after his attack on immigrants and thereby he makes ICE the most hated government agency, one that operates like the Gestapo.

Agents now can deport anyone, as they indiscriminately round up undocumented people or heartlessly separate children from their parents at the border.

As the observant documentary, letting the viewer make up their own mind about what they are seeing, takes a serious look at the bureaucracy of immigration enforcement and how the ICE agents often flaunt the rules whenever they want to with no repercussions. It also shows ICE sometimes properly doing their job to stop illegals from entering the country (which is what we all want the agents to do) and who can at times treat the immigrants properly and with respect. It’s just that there are too many times when there are traumatic house raids without warrants and we see the callous agents laughing at the immigrants behind their backs after harassing them. Deservedly they are the villains in this piece.

The first episode begins with ICE agents at a NYC apartment building at dawn banging on the door of a woman’s apartment. When she asks them to identify themselves, they only say: “We’re not going to yell out in a hallway through a closed door. That’s not how we do business.” She opens her door because she has no way of knowing that they’re immigration police there to arrest her father. When she asks for a warrant, an agent offers her a business card. He then mockingly tells her “you opened the door and let me in,” as he suggests the illegal arrest is her fault.

Other startling ICE incidents are shown in places like Charlotte and El Paso.

The filmmakers say ICE officials when they realized how bad they looked to most Americans (not the despicable Trump followers), pushed to have scenes deleted or to delay the release until after the presidential election. They failed at the courts on both accounts.

It’s must see television. It cries out for a fair and clear immigration policy from our government. Even if it’s true under the Obama administration ICE also operated to kick out illegals, but these same agents did it according to the book and not in the cruel and thuggish way it’s done under the Trump administration. It seems ICE reacts to the authority group in power and behaves as the power group wishes. With a bad person in charge like Trump, ICE will be on its worst behavior.

In this relevant film, we have the rare opportunity of being witnesses to history. 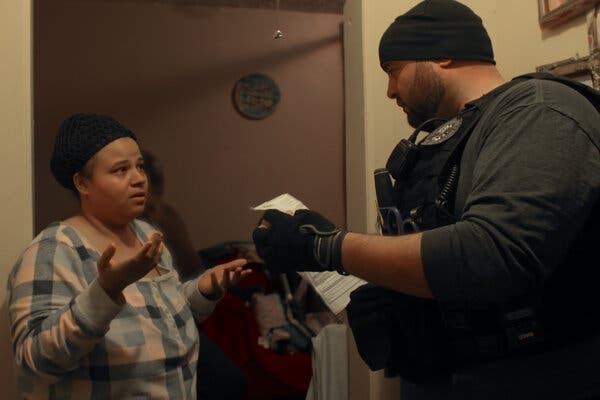