REVOLT OF MAMIE STOVER, THE

“A flat romantic drama, whose only asset is seeing the buxom Jane Russell in CinemaScope.”

A revolting melodrama that’s as phony as falsies. It has the distinction of being a trashy but respectable film. The Production Code tamed William Bradford Huie’s naughty novel in which the film was based, and it was written in a listless style by Sydney Boehm. The filmmakers sanitized things by making the heroine a materialistic dance hall hostess instead of a prostitute, as she was in the novel. The result is a flat romantic drama, whose only asset is seeing the buxom Jane Russell in CinemaScope. The part was originally intended for Marilyn Monroe, but she turned it down. Director Raoul Walsh (“High Sierra”/”Esther and the King”/”The Big Trail) doesn’t help matters by keeping things predictable, dull and absurd.

In 1941 bad girl dance hall hostess Mamie Stover (Jane Russell) is escorted by a San Francisco policeman to a freighter bound for Honolulu and tells the dancer/singer she’s not wanted in this town (why this is so, is never explained). The only other passenger on board is wealthy novelist Jim Blair (Richard Egan), who is returning home to his Honolulu hilltop luxury home. The two chat and Mamie lets the high-minded writer know that she’s a poor gal from backwater Leesburg, Mississippi, who aspires to become a millionaire, find love and get some respect.

Mamie gets hired by the pragmatic owner of The Bungalow, Bertha Parchman (Agnes Moorehead), to work in the dance hall that caters to military personal who buy a ticket to dance with the babes and are hustled for drinks. Harry Adkins (Michael Pate) is the sadistic manager and club enforcer of the house rules: hostesses are forbidden to have boyfriends on the “outside,” and are not permitted to go to Waikiki Beach or have a bank account.

Jim’s lady friend is the docile fellow wealthy heiress hilltop resident Anna lee (Joan Leslie) and Jim’s obedient manservant is Aki (Leon Lontok), who resents Mamie because he feels she doesn’t belong in her boss’s elite company. But Jim is not thinking with his head and romances Mamie. She dyes her hair red and becomes the star attraction at the club that soon changes its name to the “Flaming Mamie.”

After Pearl Harbor, Mamie has saved enough bread to buy real estate at bargain basement prices from those businessmen fleeing in panic from the island. Jim enlists in the army, and promises to marry Mamie after the war if she quits her dance hall gig. But Bertha offers her a partnership and the money is too good to refuse. When Jim learns that Mamie can’t be trusted to keep her word he dumps her, and a despondent Mamie leaves town to return home to Mississippi. While stopping over in San Francisco, Mamie’s informed by the same policeman from before that she is not welcome (the cop we can assume has nothing else to do but wait around the docks to tell a bad girl like Mamie she’s not wanted in such a clean living town). After Mamie tells him that she is just passing through on her way home, he comments that she looks like she “didn’t do so good in Hawaii.” When Mamie counters would he believe that she made a fortune and gave it away, he just shakes his head. Well, that’s exactly my reaction.

Jane sings “Keep Your Eyes On the Hands,” the film’s signature song. 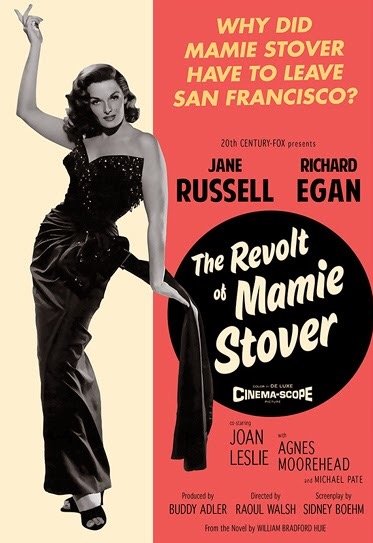