“A sweet “new old comedy” that is heavy on nostalgia and light on making waves.”

A sweet “new old comedy” that is heavy on nostalgia and light on making waves. It’s based on real-life personality Mickey Stern. “Returning” characterizes in a farcical way a macho common man type who doesn’t act normal because he’s once again in the spot where he fell in love and thinks he has a chance now to set the past right. I blame the 3-D glasses the hero wears for the thin plot line seeming so blurry.

“Returning Mickey Stern” has enough laffs in it, Jewish humor, and good feelings for its daffy subjects to survive the formulaic sitcom trappings. The story built around a corny coincidence got stuck in the dunes soon after the protagonist got off the ferry and discovered there was a time warp on Fire Island, as he’s bemused that there are still no cars allowed on this summer vacation haven for New Yorkers.

Its romantic comedy shenanigans are styled for the 1950s crowd. There are many harmless one-liners afloat, such as this one directed to Mickey by his best friend: “Act your age, not your shoe size.” It’s basically a feel-good film without an indie edge, but it’s also not a mainstream Hollywood film; it solely aims to be a crowd-pleaser. It’s most likely to be appreciated by those who flock to see the likes of pics such as “My Big Fat Greek Wedding.” At least, this indie film hopes that’s the case.

“Returning” plays too much on the belief that some things don’t change and that your will can make your dreams a reality, as it becomes too pushy in showing some things are not all that different in 2000 than they were in 1950. Hey, for the sake of enjoying the film, I’m willing to suspend my disbelief on that to a certain point.

The embittered soon to be 68-year-old Mickey Stern (Joseph Bologna) is sitting on a park bench with his older best friend Harry (Tom Bosley), a Jewish refugee from Eastern Europe who came to America in 1950 and was awe struck with his new surroundings. From their conversation we learn the reason Mickey’s so uptight is because his wife Leah has died. She’s the one he loved ever since he met her on Fire Island in 1950, but only married her last year. The friends return to her family house in Seaview, Fire Island, to retrieve her possessions. This is the first time Mickey has been back in fifty years. While looking at the photo he finds of himself as a naive, cocky 17-year-old, holding in his arms the 23-year-old sultry beauty he fell in love with that summer on Fire Island, it brings back wonderful memories when he was filled with hope and bluster. His dream was to be a Jewish Mickey Mantle and play ball with the New York Yankees, who signed him to a contract after his glorious all-city baseball days at Monroe High School in the Bronx. But first he joined the marines and fought in the Korean War, where he earned a Purple Heart. He injured his throwing arm which prevented him from playing with the Yankees, though he did manage in 1952 to squeeze in seven months as a utility player with the Boston Red Sox. His other setback was that his true love Leah separated from him because she couldn’t wait for him to get out of the service and was probably still concerned by their big age difference. She continued her studies to be a doctor like her father.

When Leah wrote him a letter a year ago and the two met after not seeing each other since that summer on Fire Island, they fell in love again and married the next day. The shaky Mickey imagines he sees her on the island as he chases down an attractive young woman, Ilana (Kylie Delre), who resembles Leah. He then runs into a 17 year old clerk in the local general store, Michael (Joshua Fishbein), who is the spitting image of him at that age. Mickey barges in on both of them, and is annoyed that Ilana is seeing an older man, Ben (Oberlander), whom he thinks is unsuitable for her because he’s a flirt. Meanwhile, Michael doesn’t believe it’s possible that he could even meet the Leah lookalike or even get her name, as he secretly desires the beauty but can’t get to first base with her.

The film goes into the formulaic mode, as Mickey mentors the kid and tries to relive his youth by living vicariously through him as he teaches him the ropes about love. He pushes Ilana away from Ben and toward Michael. When things don’t go as planned, the lesson the professional magician learns is that love can’t be forced — each person must pursue it in their own way.

Connie Stevens has a minor part as a romantic interest for Mickey. Also comedienne Renee Taylor (she’s married in real-life to Bologna) has a peripheral part as an aggressive manhunter in pursuit of Harry and acts nuttier than Mickey at his most bizarre moments.

In the press guide it mentions that this film’s principal photography was completed in 19 days and that it was the first 35mm feature film ever shot on Fire Island. Also, four of the younger cast members were cast via an Internet vote on the web site CastOurMovie.com. They chose Sarah Schoenberg, Kylie Delre, Michael Oberlander, and John Sloan. All of them gave solid performances, and Sarah and Kylie in addition are real good lookers. But the performance that holds the film together is the easy going nutty one by Bologna, who plays his whimsical character with a playful wink.

This is filmmaker Michael Prywes’ debut feature film. The creative writing grad from Northwestern University became the founder of Chicago’s Jewish Theatre Ensemble, which earned him the Elie Wiesel National Prize for Jewish Arts and Culture. He currently teaches Screenwriting 101 at Queens College and at the Catholic St. John’s.

The 26-year-old filmmaker shows some potential for doing comedy, but he seems to be hung up in repeating all the clichés and formula devices of other sitcoms. He tried too hard to make everything fit happily together by the conclusion. The story was first created as a “thesis project” for the UCLA Professional Program in Screenwriting. It looks like a technically proficient work and should be commended for accomplishing that after being shot for under $1 million dollars, which is merely a shoestring budget in today’s market. 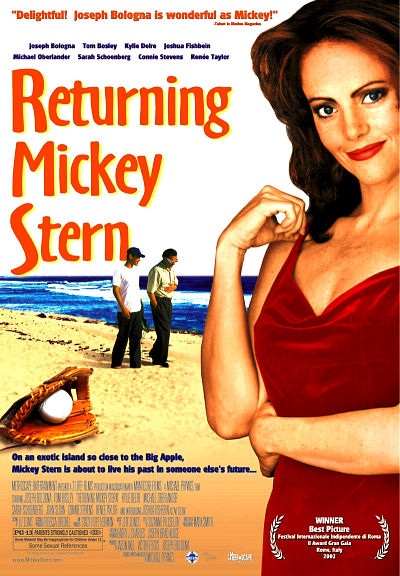 MOLOKAI: THE STORY OF FATHER DAMIEN