REQUIEM FOR A VAMPIRE (aka: CAGED VIRGINS) (VIERGES ET VAMPIRES)

It opens with teenage girls, Michelle (Mireille Dargent) and Marie (Marie-Pierre Castel), for some unexplained reason dressed as clowns, toting guns and on the lam. They are making a getaway by car from what I would guess is a school (only because the girls later change into their sexy school uniforms). After escaping a shootout car chase the girls douse their fatally wounded male accomplice driver with gasoline and blow up the car with him in it. They next rob a motorcycle, and while one of the girls lures a curbside food vendor into the nearby woods for sex the other loots his food wagon. Next the bad girls stumble upon a cemetery, and then enter a chateau. Bitten by a bat, the girls learn they’re in a castle that’s a refuge for vampires. They take a break from their exciting adventure to make love to each other.

The chateau residents include an aging philosophic ancient vampire (Philippe Gaste), calling himself the last of his breed, his mistress Erica (Dominique Toussaint), a woman vampire instructor named Louise (Louise Dhour) and three wannabe in-training brutish male vampires hanging around the place to see if they can gain vampire powers. The hairy male trainee vampires chain and molest the girls in the castle dungeon and then force them to lure fresh vics into the castle so the coven of vampires can get a midnight snack.

The girls are told by the pathetic Last Vampire that they will be initiated as virgins in a ceremony to be vampires (only virgins in this vampire pic are eligible to become vampires) and thereby the blood sucking race will carry on in the future. But when Marie refuses to go along with the plan and is seduced by nice local outsider Frédéric to lose her virginity, she’s tortured by the ‘anxious to be a vampire’ Michelle to reveal whereFrédéric is hiding on the grounds. When the girls decide to make nice to each other and team up again, the two unsympathetic girls must fight their way out of the chateau grounds in their desire to return to the normal world.

The damsels in distress horror pic ends with things getting resolved, but who really cares? At least the superficial film is proficiently shot, as the location shots of the lush rolling hills in the French countryside were photographed in an arty way and the castle ruins invaded by bats got my attention. 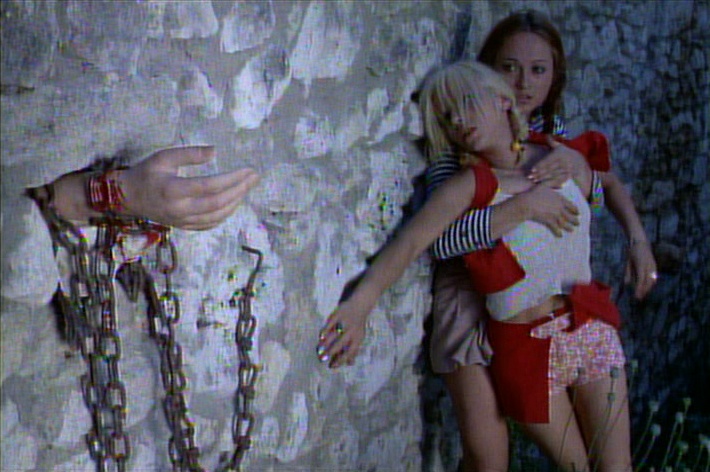