“Sets a chilling downer mood that gets under your skin like few films ever do.”

It’s the first feature of writer and director Andrea Arnold (won an Academy Award for the short entitled Wasp), and is the first in a Lars von Trier–inspired Dogme trilogy in which three directors would use the same cast of characters for their films which will all be set in Glasgow. This unique three-film project is entitled the Advance Party Concept. Red Road is a grim psychological thriller/revenge tale that sets a chilling downer mood that gets under your skin like few films ever do but begs questions about the heroine’s bizarre behavior, which I found incredibly hard to swallow.

Jackie (Kate Dickie, the film debut for the known British television actress) is a CCTV operator, watching for crime in an Orwellian “Big Brother” way on close-circuit television screens in the control room of City Eye (a police observation center). Her screens cover the depressed remote northern section of Glasgow, that includes a group of bleak looking, crime-ridden and graffiti-ridden high-rise buildings for the poor on Red Road. Her job is to record any trouble and phone the police when appropriate. One night while watching a prostitute turn a trick in an empty lot, she spots the burly, ginger-haired Clyde Henderson (Tony Curran) and soon discovers this thuggish but gregarious character she knew from the past is working as a locksmith and living in a flat in the Red Road project. We don’t find out until near the end that Clyde’s the reckless crack addict sent to prison for the car accident deaths of Jackie’s husband and young daughter. The distraught Jackie is upset that he’s released earlier for good behavior than his ten year sentence for manslaughter and becomes obsessed with getting revenge on him for ruining her once happy family life. The lonely woman, since the death of her family members, has avoided contact with the family of her late husband and her only significant relationship is with a married colleague (Paul Higgins) whom she meets every fortnight for listless sex in the backseat of his car, where she fakes her orgasm. Jackie seems to be operating in a vacuum without realizing how far gone she has become; she can’t resist stalking the brash ladies’ man and after flirting with him in a cafe meets him when she crashes his house party. What she does after confronting him moves the story into an area of blurred ethics and improbability, and the increasing paranoid melodramatic developments push aside any logic and nearly bring down this fascinating mood piece that boldly mixes graphic sex, gritty realism and an odd way to find redemption.

Despite some regrets I had about the story taking such a far out left turn off course, this is fresh and brave filmmaking. It’s a sensitive film told from the point of view of a disengaged woman preoccupied that her life also dies when her beloved family dies and that she now has no inhibitions about also being reckless. It’s filled with many wonderfully spellbinding observed scenes that range from the voyeurism scenes on the screens to the ticklish project party scene to the harrowing sex scene between Jackie and the man who took away her family. 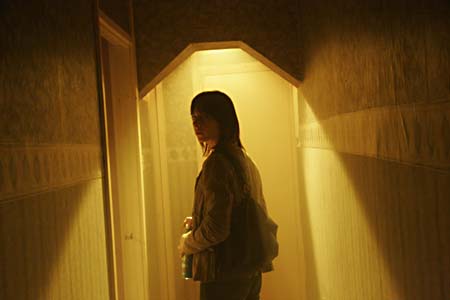