“Intriguing look behind-the-scenes drama of how in 1961 “Mary Poppins” was filmed by Walt Disney and released in 1964.”

P.L. Travers (Emma Thompson), the sourpuss Brit writer of the popular children’s book Mary Poppins, needs money when no more royalties from her book are in the works and after turning down for the last 20 years Walt Disney’s (Tom Hanks) request to buy the film rights, something he promised his book loving two daughters, a new opportunity arises and Disney makes a deal with the unfriendly and bossy Mrs. Travers that gives her the upper hand. He’s taken aback how when she comes to LA is bitchy and uncompromising about any changes to make MP whimsy without gravitas. She’s also aghast that Walt (someone she can’t stomach for his manipulative superficial cartoons) is making it with animation and as a musical. Travers is furthermore upset that Dick Van Dyke is cast as the star. For two weeks Walt, animator/screenwriter Don DaGradi and the song writing Sherman brothers, Richard (Jason Schwartzman) and Robert (BJ Novak), bend over backwards to try and please the intransigent Mrs. Travers, who holds final say and can end the deal at any time.

While in rehearsal, there are flashbacks to Mrs. T’s rough childhood in the Australian Outback, that gave her the scars she carried for a lifetime. We learn that writing MP was a cathartic experience, allowing her to dream of a more perfect life and to help her better understand her volatile, playful and drunken dreamer bank manager father Travers Goff (Colin Farrell), the Mr. Banks of the book, who pulled the family down the social scale because of his irresponsible behavior. We eventually learn that Terry’s favorite daughter Helen Goff (Annie Rose Buckley) is the idealized version of Pamela Travers.

How things changed in the relationship between antagonists and how the pic eventually got made (with flying penguins) into a classic, becomes the gist of this interesting story. We learn that despite all the misgivings, the testy relationship endured between the prickly author and the charming legendary showman, especially when he turned therapist, and thereby cinematic history was made.

The old-fashioned pic tries too hard to get to our heart-strings, to make the studio boss into a kindly figure while ignoring his penchant for controlling things. It also fouled things up with the clumsily shot scene of Walt as the therapist, and at times is too schmaltzy. But, despite such apparent faults, it’s a decent pic that tells a story that should be of interest to many movie-goers. 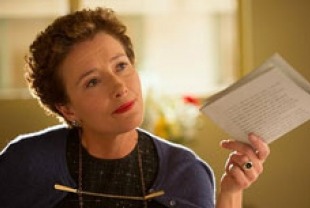