“It was that kind of a dubious movie, where there is just no escape from its excesses despite its credo being there’s always a way to escape.”

An off-the-wall cornball personal martial arts film written and directed by the blustery playwright-turned-filmmaker David Mamet (“State and Main”/”The Spanish Prisoner”/”The Winslow Boy”) in full Mametspeak with added heavy doses of two-fisted action, homages to the pure warrior, lots of character development and lectures throughout on morality that are amusing in a perverse way.

It’s set in a nondescript Los Angeles neighborhood, where Mike Terry (Chiwetel Ejiofor, British actor by way of Nigeria), a follower of Brazilian jujitsu, runs with his aggressive money-hungry wife, Sondra (Alice Braga), a struggling small Brazilian jujitsu academy. Mike teaches his prize pupil, a cop named Joe (Max Martini), such handy things as how to fight with one hand bound and urges him on by constantly imploring him with his favorite credo that “There is no situation from which you cannot escape.”

Mike is a straightforward, sweetheart of a guy, who lives by a strict code of samurai honor that tells him to always do the right thing (think Jarmusch’s Ghost Dog: The Way of the Samurai!). Of course, in a Mamet film this will only set him up to be a vic in the sleazy outside world for those who lie and cheat, and play by their own rules of looking out only for Number One. Though facing bankruptcy due to business being slack, Mike refuses to enter jujitsu competitions because he believes such events are artificial and take away from the purity of the fighting skill; this is despite his wife nagging him that she can’t keep putting money into his business from her more lucrative fledgling dressmaking one. Things hit critical mass when a high-strung lawyer named Laura (Emily Mortimer) comes out of the rain and enters the academy in a panic after denting Mike’s parked car outside, and accidentally fires Joe’s police gun left on the counter and breaks the storefront’s plate glass window. Joe chooses to ignore the incident and lets her go rather than put the lawyer on the hot seat of the complicated judicial system. Not having enough money to pay for the window, wifey gets furious with her honorable hubby and compares his money failures with the money successes of her fast operator brother Augusto Silva (John Machado), who runs a nightclub and is a part-time fight promoter, and her other brother, the famous fighter Bruno Silva (Rodrigo Santoro), in town to participate in a series of questionable TV jujitsu matches.

While Mike is in Augusto’s bar to ask for a loan and find out why his bouncer pal quit working there, he rescues a famous Hollywood actor, Chet Frank (Tim Allen), who came in there unannounced without his bodyguards and is set upon by an unruly patron. The grateful actor invites Mike and his wife to his home for dinner, where they meet Chet’s slippery sinister right hand man, Jerry Weiss (Joe Mantegna), and Chet’s wife Zena (Rebecca Pidgeon, Mamet’s wife). The ladies set up a business venture over dressmaking, while the next day the actor offers Mike a coproducer’s job on his new Operation Desert Storm film. Knowing Mamet’s House of Games ways, this Hollywood gift only looks like a backdoor scheme to somehow get the honest fighter to compromise his beliefs and fight competitively in the ring in order to help the crooked promoter sell tickets.

Things take absurd turns from hereon as the plot goes out of control and it becomes a tough film to fall for despite its main actor being someone you can root for. The contrived plot gets overloaded with coincidences, double-crosses, a wife’s betrayal, a friend’s suicide over a pawned watch that was hot, dealings with a sad-faced loan shark (David Paymer), the annoying antics of a brazen magician (Cyril Takayama), a heavy meeting with a sleazy crooked fight promoter (Ricky Jay) and a completely absurd climactic fight scene that follows along the arc of such boxing movies as The Set-Up. It seems like Mamet lifted the theme of many old-time liberal motivated B-movies of the incorruptible loner good guy battling the corrupt evil establishment.

Mamet mentions that he’s a longtime student of jujitsu and possesses a purple belt, and offers a superlative crash course in that fighting art. From the jujitsu POV he has created an action-packed sports noir film with jujitsu serving as a lesson on how to deal with life. By the end of the day, it all seems like a con artist’s shell game where you think you picked the white shell but it turned black as if by sleight of hand. It was that kind of a dubious movie, where there is just no escape from its excesses despite its credo being there’s always a way to escape.

By the way, a red-belt is the one that comes after a black-belt. 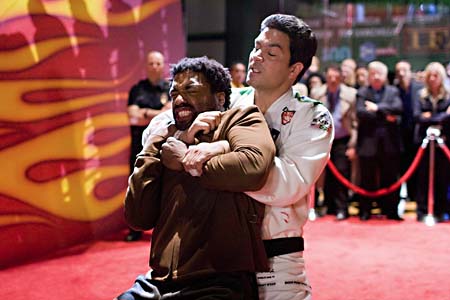